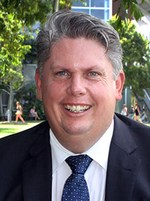 In 2015 Professor Kimlin accepted a research-focussed joint role at USC and Cancer Council Queensland as Foundation Professor in Cancer Prevention.

Having significant, national and international recognised developments in the field of cancer prevention, Michael plans to increase these alliances and expand his research in conjunction with the new University Hospital at Kawana.

In October 2010, in his former role at QUT, Professor Kimlin received an NHRMC funding grant to establish a Centre for Research Excellence in Sun and Health (CRESH) within IHBI. Professor Michael Kimlin lead the centre, which focuses on the interrelationships of:

Some common negative health effects are: