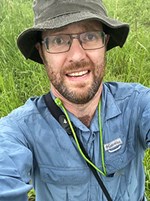 Andy Marshall joined the Tropical Forests and People Research Centre at USC in March, 2017 as a Senior Research Fellow, continuing as ARC Future Fellow from January 2018.

Andy is a conservation scientist aiming to measure and improve the management of threatened ecosystems. His primary interests are the quantification of human and environmental influences on species and ecosystem health; and the implications of these for people and conservation. Andy's research has assessed the impacts of tropical forest damage on plant and animal biodiversity, population density, and biomass. He mainly works in tropical forests with a focus on Tanzania (East Africa), but his data have contributed to continental, tropical and worldwide assessments of species, biomass and productivity.

His current Forest Restoration and Climate Experiment (FoRCE) is investigating patterns in natural and managed recovery of forests across the tropics, including the influence of vines. He is also developing new methods for forest restoration, landscape planning, and selecting conservation indicators. Andy's broader research also assesses the impacts of protected areas and forest health on people in developing countries and also the worldwide conservation and educational role of zoos.

Andy is dedicated to achieving practical results from his research findings. His work has contributed information for the improved management of forest health, natural resources in African villages, and conservation planning/monitoring. He established and directed Reforest Africa, a not-for-profit company registered in East Africa. He has also directed the management of a tropical forests, and has developed and implemented a biodiversity action planning approach for zoos.

You can also stay in touch with Andy at: