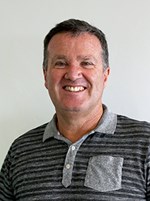 Dr Mark Sayers joined the University in 2005, having worked as a sports scientist since the 1980’s. He has an extensive background in the biomechanics of team sports, technique analysis, and the development of sports specific speed and power.

Mark is an extremely experienced and popular lecturer, having held academic positions in sport science since the late 1980’s. In 2012 he received a national Office of Learning and Teaching Citation and in 2010 was voted one of the top ten lecturers in the country.

Dr Sayers has been a consultant biomechanist and coach for several national and international high profile sporting bodies and is recognised internationally for his work on the key skills in the sport of rugby union.

He was the biomechanist and special skills coach for the New Zealand All Blacks between 2000 and 2001 and again from 2004 to 2008 and has been credited as being a key aspect of the team’s success over the past 10 years.

Dr Sayers has over 60 peer reviewed publications in scientific journals, has authored or co-authored 8 book chapters, and has presented at more than 30 national and international conferences.

Mark has successfully supervised more than 30 HDR and Honours students.

Sport fanatics on the Fraser Coast have the opportunity to turn their passion into a career with the University of the Sunshine Coast introducing a Bachelor of Sports Studies from 2016.