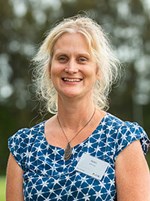 Dr Helen Nahrung has over twenty years' experience in insect biology and ecology towards sustainable pest management methods in plantation forestry. Her research focus is primarily in forest invasion biology of exotic pests in Australia, and Australian native insects that have become invasive overseas. She also works on insect–plant co-evolutionary interactions, including host location mechanisms and host defence.

Helen was one of the last Honours graduates from the Department of Entomology at The University of Queensland. She worked for four years on weed biocontrol at the Alan Fletcher Research Station, and moved to Hobart in 1999 where she completed her PhD through the University of Tasmania and Cooperative Research Centre for Sustainable Production Forestry on one of the state’s most serious hardwood pests. She then undertook a postdoctoral fellowship at Queensland University of Technology, also in the field of forest entomology, and subsequently worked for six years on hardwood plantation pests with the Queensland Department of Primary Industries in the Forest Health Group. She has been at the University of the Sunshine Coast since early 2012, where she specialises in invasive forest pest prevention and management. Her expertise is in insect–plant interactions, but she has also worked extensively with natural enemies, development of predictive population models, and insect reproductive ecology. She is also interested in the applied use of semiochemicals/chemical ecology for pest monitoring and management, as well as examining drivers of insect invasions, particularly of forest pests.

Helen works between the USC Sippy Downs campus and the EcoSciences Precinct in Brisbane on several projects in hardwood, softwood and high-value timber plantations from Stanthorpe to the tropics, including chemical and landscape ecology, invasion characteristics, biological control, and population modelling.

Flavia Sarti-Bonara: " Studies of plant interaction with pests and pathogens in Corymbia species and hybrids".