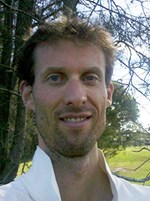 Dr Max Stuelcken joined the School of Health and Behavioural Science in late 2012 after three years working as an Associate Lecturer and Research Assistant in the Discipline of Exercise and Sport Science at the University of Sydney. He has taught at undergraduate and postgraduate level into areas such as Biomechanics, Ergonomics, Functional Anatomy, Kinesiology, and Research Methods.

An underlying theme of much of his research has been the identification of links between biomechanics and injury. He has obtained competitive funding for some of his research and published his work in well regarded peer-reviewed journals. He has been involved in research projects in sports such as cricket, netball, swimming, tennis, golf, and rugby union.

Max has also worked in biomechanics positions at both the Australian Institute of Sport and New South Wales Institute of Sport where he was involved in the sports science servicing of scholarship athletes in sports such as cricket, swimming, and baseball. From 2006-2010 he was accredited by Swimming Australia to undertake competition analyses for Australian swimmers during major national and international meets.

Max is a member of Sports Medicine Australia and the International Society of Biomechanics in Sport.