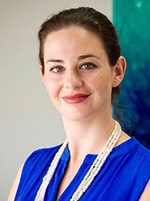 Sophia has been involved in the School of Law and Criminology since early 2014, tutoring, lecturing and developing course materials. She currently lectures in Constitutional Law, Corporations Law and Public International Law.

Sophia was awarded the University Medal for her undergraduate studies and has won prizes including the Prime Minister’s Australia Asia Endeavour Award, which enabled her to undertake further study and research into international law and policy in Beijing, China.

Prior to joining the School of Law and Criminology, Sophia worked for the International Crisis Group; an independent NGO committed to preventing and resolving global conflict. Sophia is admitted to the legal profession and has worked locally as a litigation lawyer. She is also an active member of the Sunshine Coast community having served on the Board of not-for-profit groups.

Sophia’s doctoral research will focus on the international law of crimes against humanity.