Australia’s favourite scientist Dr Karl Kruszelnicki has added another string to his academic bow after receiving an Honorary Doctorate from the University of the Sunshine Coast.

The author, media personality and public speaker was presented with the award during a special ceremony to mark USC’s 20th anniversary on Friday. He wore a trademark bright shirt – featuring labelled dinosaurs – and a Rubik’s cube belt buckle.

About 700 guests attended the event, at which Dr Kruszelnicki gave a lecture on the future prospects for scientific research and the importance of pursuing education.

USC Vice-Chancellor Professor Greg Hill said Dr Kruszelnicki’s outstanding contribution to enlightening and inspiring the Australian community in all matters of science made him a worthy recipient of the Honorary Doctorate.

“For students, Dr Karl is an ideal role model,” Professor Hill said. “He’s proof that you can follow your dreams to create your own destiny, but along the way you’ll need to work hard to support your pursuit of happiness.

“The way Dr Karl shares his knowledge is perhaps his most noticeable contribution, and that is why his career resonates with USC.”

Dr Kruszelnicki, who already has degrees and qualifications in medicine, surgery, biomedical science and astrophysics, told the audience that he was passionate about the pursuit of knowledge throughout life.

He said receiving the Honorary Doctorate from USC made him a “real doctor” at last.

“Education is the best bet we’ve got going,” he said. “I have had 28 years of education, which is then combined with reading my way through $10,000 of scientific literature every year.

“There are many possible paths, and education is just the beginning of your exploration.”

Earlier in the day, aspiring scientists from local high schools had the chance to meet Dr Kruszelnicki at a lively lunch, during which they discussed recent developments in science including the discovery of gravitational waves. 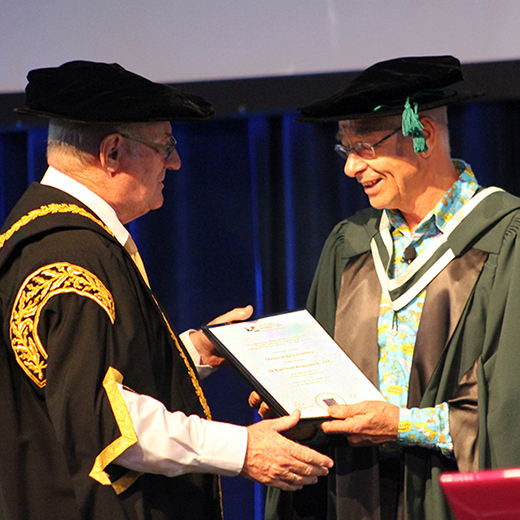