The 23-year-old Red-tailed Tropicbird was discovered as part of a USC-led project for the Great Barrier Reef Foundation’s Reef Islands Initiative which aims to establish a network of climate change refuges by protecting critical habitats in the world's largest coral reef system.

The vulnerable Red-tailed Tropicbird (Phaethon rubricauda) is rarely seen on land as it spends most of its life at sea, so USC marine biologist Dr Kathy Townsend said it was exciting to find five active nests among Lady Elliot Island’s known breeding colony recently.

“Even more exciting was that as we were tagging these birds, we discovered that a parent of the youngest chick in the nests – a gorgeous fluffy white bird nicknamed Marshmallow – already had a tag,” Dr Townsend said.

Through a little detective work, the research team identified that it was from a Queensland National Parks program from the late 1990s and set about locating the rangers who first tagged the bird.

“Their old records showed it was first tagged as a chick in 1997, which possibly makes it the oldest known active breeding Red-tailed Tropicbird in the world,” Dr Townsend said.

“We are waiting on samples to determine the sex of this particular bird but we do know from these records that it has built a nest on the ground for its chick within centimetres of where its own parents hatched and cared for it more than 20 years ago.

“It appears to have inherited the family’s prime waterfront plot from its parents, and who knows, maybe one day it will be passed on to Marshmallow for his or her offspring.”

Dr Townsend said this indicated a high level of site-attachment in these birds – similar to marine turtles – by returning to the same section of beach each nesting season.

“This exciting discovery just further highlights the importance of protecting the ecosystems that provide a safe home for our Reef’s amazing animals against a growing combination of threats,” Ms Marsden said.

“The Reef Islands Initiative is just one of more than 60 Reef-saving projects the Foundation has underway right now.”

As part of the Reef Islands initiative, USC is leading ‘Leaf to Reef: Biodiversity of Lady Elliot Island’, a collaborative project to set a benchmark to measure change from local and global climate pressures on habitats and critical reef species, such as the Red-tailed Tropicbird.

The USC team of Dr Townsend, USC ornithologist Dr Dominique Potvin, Research Fellow Dr Chris Dudgeon and Animal Ecology Honours student Zerra Egerton, say their recent research has provided new insights into the seabird, which struggles to walk on the ground and only ventures on land to nest and raise its young.

Samples taken by Dr Potvin will be genetically tested for connection to other known breeding colonies, including the closest at Raine Island in the northern Great Barrier Reef.

“Relatively little is known about this species, which pairs for life and raises a single chick each year,” Dr Potvin said. “By observing these birds over several days as they shared the care of their young, we’ve been able to identify patterns in feeding and nesting behaviour.

“Wintertime is outside the normal breeding season for most birds, so it also appears this shy bird could time its nesting to avoid other migratory seabirds who visit Lady Elliot Island each summer to breed and nest, such as the noisy Wedge-tailed Shearwater or mutton bird.”

The next step in understanding more about the Red-tailed Tropicbird is to track its offshore activities to find out what it does while at sea, and how far it travels on feeding journeys.

Researchers plan to re-tag the birds with GPS transmitters when they return to Lady Elliot Island to carry out further research into its marine life, seabirds and coral reef ecosystems.

Pioneered by the Great Barrier Reef Foundation, the Reef Islands Initiative is supported by funding from Lendlease, the Australian Government’s Reef Trust, the Queensland Government and the Fitzgerald Family Foundation. 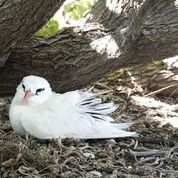