USC’s Professor of Microbiology Peter Timms has featured in an ABC TV Catalyst program called “Are We Killing Our Koalas?”.

The program, presented by USC Honorary Doctor and renowned conservationist Professor Tim Flannery on Tuesday 16 February, looked at how Australia’s koala population has been affected by climate change, bushfires and habitat destruction as well as other major threats, including chlamydia.

Professor Timms said his team of researchers at USC's Genecology Research Centre have developed over 10 years a single-shot vaccine for chlamydia in koalas, and this vaccine was likely to be rolled out across Australia soon.

He said trials of this vaccine had shown some very promising results.

“We did a trial where we gave the vaccine to animals already with the disease and in six out of seven koalas it actually reversed the disease and they could be released back into the wild without using antibiotics, which can have serious side effects,” he said.

“It also appears to give a pretty good response to animals that are infected but otherwise look healthy, but might get sick in a year’s time."

The program can be viewed online at www.abc.net.au/catalyst/are-we-killing-our-koalas/13161298

Donations to this important research can be made via the USC Development Office. 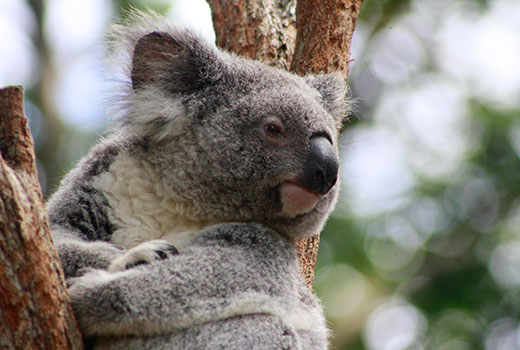 USC is leading a Phase 3 rollout of a koala chlamydia vaccine that has been developed collaboratively over many years with many partners, including the Australia Zoo Wildlife Hospital.