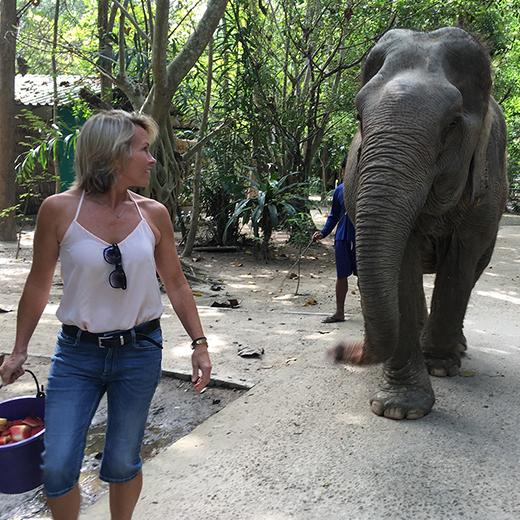 Lecturer, journalist and media commentator Dr Jane Stephens (nee Fynes-Clinton) said she was prompted to write the non-fiction account of Mr Wiek’s life after meeting him while volunteering at his wildlife rescue centre in Thailand.

“After a half a dozen trips to Thailand for interviews over 18 months, we had what I hope is a textured and honest biography of an extraordinary man,” she said of the 184-page paperback published by Austin Macauley.

Dr Stephens, who has been a journalist for more than 30 years and writes for News Corp Australia, said the book had two themes.

“It shows that individual people are capable of making big, positive changes in the world and it highlights the situation for animals who should be wild but are used by humans for entertainment or work,” she said.

“In the course of my research, I went with Edwin to temples and people's homes to negotiate for the handover of monkeys and otters, apes and birds – most of them treated either like children or things. It was shocking.”

Dr Stephens hoped the development of the book would show USC students that there were always new adventures and opportunities for journalists.

“You just have to be nimble, committed and unafraid of new mediums,” she said. “It was like the longest feature article I have ever written. I approached it with the ethics of my journalism background in place. It was important for it to be truthful and well researched.”

The Cotton Tree resident said her favourite wildlife and wild places were still on the Sunshine Coast.

“It might be a turtle bobbing up as I wait for a wave on my surfboard, the bearded dragon in my front garden or the kangaroos lingering outside our buildings on campus,” she said.

“The book echoes the importance of sustainability, which is one of USC's key focuses. It radiates the message that we can and must do better at caring for our natural world, both flora and fauna.”

A Wild Life: The Edwin Wiek Story is available at Austin Macauley Publishers and Amazon.