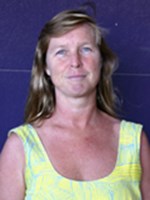 Associate Professor Alison Shapcott has been researching the population genetics and ecology of rainforest plants and palms since 1985. Associate Professor Shapcott is particularly interested in the evolution and maintenance of biodiversity. She has worked with rainforest types across Australia from Tasmania to Cape Tribulation and the Northern Territory as well as in Madagascar, Papua New Guinea, Djibouti and Brunei. Associate Professor Shapcott has established an extensive international network. She regularly collaborates with researchers at the Royal Botanical Gardens of Kew UK, the Smithsonian Institution NMNH USA, and the Qld Herbarium. She has an active research group with several postgraduate students.

Associate Professor Shapcott has been exploring methods to integrate her work with other related disciplines such as systematics, population modelling ecophysiology, pollination ecology and animal behaviour, GIS, environmental modelling, climate change, microbiology. Recent projects have included investigating the impacts of fire regimes at a landscape scale including modelling their patchiness and the impacts of fragmentation and fire combined on rare species viability and implications for improving fire management practices to enhance biodiversity. She has been developing population and metapopulation modelling approaches particularly integrating these with habitat modelling approaches to investigate impacts of climate change on species to investigate landscape species viability, management and recovery recent project have applied these approaches to endangered species on Lord Howe Island, and the Sunshine Coast. Much of her work has focused on endangered species recovery.

Associate Professor Shapcott has been an active participant in several threatened species recovery teams particularly acting to synthesise and translate information from across disciplines and between land managers, scientists, conservation groups and industry organisations to enable practical solutions. She has been involved in several restoration projects where she provided expert advice and or lead the ecological aspects of the project in collaboration with external bodies including property developers, local Councils, restoration/conservation community groups, government departments, energy industry companies, professional organisations (Australian Macadamia Society) and traditional owners. These have included a 15 Ha heath translocation project which included translocation of populations of five vulnerable or rare plant species, a recovery project for the endangered species Allocasuarina emuina and a reintroduction and recovery project for the endangered Macadamia jansenii and a translocation project for the endangered Cycas megacarpa.

She has published widely in international journals and is recognised internationally for her contribution to this field. In 2012, Associate Professor Shapcott was awarded a fellowship at the world-renowned Smithsonian Institution in America where she worked on creating a DNA barcoded library for South-East Queensland rainforest plants. Her work is now expanding from a population based approach to innovative integration of genetics and community ecology using DNA barcoded libraries to assess biodiversity.