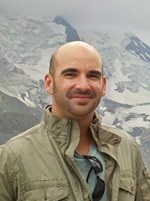 Dr Clemente is interested in the relationship between form, function and ecology of living and extinct animals. His earliest studies examined the relationship between vision and ecology in spiders. Later, at the University of Western Australia, Dr Clemente switched his focus to the evolution of locomotion. He studied morphology, metabolic rates and biomechanics and compared these to ecological characteristics and locomotory ability in a large group of lizards, the varanids. Dr Clemente similarly studied these traits in other lizard groups, including an extensive project examining the evolution of bipedalism in dragon lizards, showing lizards were essentially popping a wheelie. He later continued his research at the University of Cambridge, focusing on insect adhesion, examining the multitude of solutions insects have developed to overcome the problems of sticking to smooth surfaces. At Harvard University, Dr Clemente examined the vertebrate muscle system, specifically how muscle mechanics integrate with the environment dynamically, during locomotion. His research at the University of Queensland continued my research into lizard locomotion, with a focus on the design of biologically inspired climbing robots. He has combined many aspects of this research into his current role at the University of the Sunshine Coast and is particularly interested in the emerging field of Evolutionary Biomechanics.

UQ-UWA bilateral scheme (2014) - How do echidnas handle the cold? Development and application of cutting edge technology to determine how echidnas exploit their environment for thermoregulation ($15,678).

Koala biomechanics as a conservation tool

This project would examine the biomechanics of koalas moving on flat or inclined surfaces. The goal would be to produce a kinematic model of koala movement and compare this to similar kinematic models of other animals climbing, including the Northern Quoll. Such a kinematic model would be the first step into characterising movement of koalas with the potential to use these models in diagnosis of disease, and to calibrate biosensors to record and predict animal movement in the wild.

All experiments would be performed on captive Koalas at Australia Zoo, or the Wildlife Hospital. To film Koalas walking in 3D, we would require two cameras to be set up on tripods, at 90 degrees from one another, both facing a particular walkway (such as the horizontal logs on display in the Australia Zoo Hospital). We would then wait for the Koala to cross this space, and collect the film of it walking. From this we will digitize landmarks on the film (such as the ankle or knees) to build a 3D model of it walking.

Our idea would then be to use this model to compare the gait of healthy Koalas with sick or injured Koalas, or those which may have diseases. Further projects may use these models combined with accelerometer backpacks, as we have done with echidnas.

Using the accelerometer backpacks we could reconstruct the movement of Koalas out in their natural environment and begin to understand the effects of Urbanisation, effects of cattle grazing, disease, or the potential for dog attacks, all projects with a strong conservation value.

But first we must understand how Koalas move. This project would be a short Honors project run between April – Nov 2016. It would require a 4th year Ecology student to visit the hospital with the cameras, once a week, for around 2-3 hours to film Koalas, for 4-6 weeks. The student will not need to directly contact the Koalas, nor distress them in anyway, only to film them from a distance. But the student will need to enter the koala enclosure to calibrate the filming space.

This project will require some working knowledge of cameras and video editing software, as well as the willingness to learn and use computer coding software such as Matlab and R. If successful this project would lead onto a longer term project at the PhD level, understanding movement in Australia's most iconic animal.

Claw shape with body size and habitat in insects, spiders, lizards and birds

Climbing up and down trees is an important task for many organisms of all shapes and sizes, in many different environments. Claws are remarkably versatile in that with small modifications they are able to perform a variety of functions, in a variety of habitats.

This project will examine this variation among insects, spiders and lizard, using museum specimens and live caught specimens to understand variation in claw shape with size and habitat.

By understanding how claw shape changes with size and function, we will aid in the design of bioinspired robots and many other bioinspired applications.

This project would require a moderate knowledge of photography. Also the ability and willingness to learn coding in Matlab and R is desirable.

This project would be co-supervised by Dr Christofer Clemente and Dr Joanne Macdonald.

When running away from a predator is it better to run fast in a straight line, or zig zag at a slower speed? Questions such as this are difficult to answer in natural systems since the variation in animal performance rarely encompasses a broad diversity of performance combinations. However by simulating prey in a computer game, and having people try to catch them, we can start to understand these ideas.

This project will build on previous projects which have looked at the relationship between speed and manoeuvrability. It uses a tablet based program to answer these questions. This project will further develop this tablet based game, producing a Java based app which will be available on the play store. This app will address the relative survival benefits of speed, manoeuvrability and camouflage.

A working knowledge of Java and android app development is desirable, though not essential if candidates are willing to learn these skills. This app will have the potential to contribute to our understanding of evolution, and may be a valuable teaching tool for undergrad students.

This project would be co-supervised by Dr Christofer Clemente, Dr Uwe Terton or Dr Mary Kynn.

For more information visit the Journal of Experimental Biology  *

Movement of Water dragons in a semi-urban setting

Water dragons are a common resident in many urban parklands and native waterways. But how does the presence of people, and the artificial construction of parks affect movement in these dragons? To answer this question we will attach small accelerometers to lizards, in order to understand the movement of lizards.

Much of this project will involve testing different accelerometers in a semi-natural enclosure, likely in conjunction with a wildlife centre such as Australia Zoo. This will act as a pilot for field trials, and help create a library of signature movement patterns to analyse movement in the field.

This project would be supervised by Dr Christofer Clemente.

Dick, T.D.M. and Clemente, C.J. (2017) Where have all the giants gone? How animals deal with the problem of size. PLOS Biology. In press.

Bishop, P. J. Clemente, C.J. Hocknull, S. A. Barrett, R. S. Lloyd, D.G. (2017) The effects of cracks on the quantification of the cancellous bone fabric tensor in fossil and archaeological specimens: a simulation study. Journal of Anatomy. In Press.

Dick, T.D.M. and Clemente, C.J. (2016) How to Build Your Dragon: Scaling of Muscle Architecture from the World’s Smallest to the World’s Largest Monitor Lizard. Frontiers in Zoology, 13(8).

Clemente, C.J. and Wilson, R.S. (2015) Balancing biomechanical constraints: optimal escape speeds when there is a trade-off between speed and manoeuvrability. Integrative and Comparative Biology. 55(6): 1142-1154

Dr Christofer Clemente's specialist areas of knowledge include the relationship between form, function and ecology of living and extinct animals. Dr Clemente has studied morphology, metabolic rates and biomechanics and compared these to ecological characteristics and locomotory ability in a large group of lizards, the varanids.