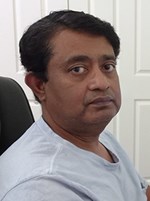 Dr Sankar Subramanian is a Senior Lecturer in Genetics. Sankar joined USC as a Senior Research Fellow in March 2017. Prior to this he worked at the Australian Research Centre for Human Evolution, Griffith University. His research primarily centers around the question of, how does genetic drift influence mutations. Sankar worked on a number of research projects to investigate the interaction between drift and mutations, which include the evolution of codon usage bias in animal genomes, temporal patterns of deleterious mutations in humans and penguins, difference in the allele frequencies of polymorphisms in global human populations. Sankar has developed methods to identify and quantify deleterious mutations in human populations.

Dr Subramanian is also interested in estimating rates of mutations and divergence times between species and populations. His research also focuses on studying ancient genomes to understand the past demographic history of vertebrates including ancient penguins, tuatara (a New Zealand reptile), moa (an extinct bird) and ancient humans. Furthermore, he is investigating the population history, mutational load and admixture patterns of modern and ancient Aboriginal Australians. At USC, he has started working on the conservation genomics of Australian Dingoes.

Society for Molecular Biology and Evolution