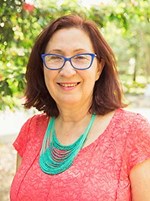 Professor Abigail Elizur has been involved in the application of molecular biology and biotechnology to aquaculture since 1990, when she joined the National Centre for Mariculture in Eilat, Israel, where she led the work on fish reproductive endocrinology. In 1999 Professor Elizur returned to Australia, and joined the Bribie Island Aquaculture Research Centre, where she initiated the aquaculture biotechnology group that links with other aquaculture disciplines.

Professor Abigail Elizur has worked with aquaculture species for more than 30 years. Since joining USC in 2004, she has built an internationally recognised research group with a major focus on the development and implementation of novel tools in the field of reproductive technologies in aquaculture species.