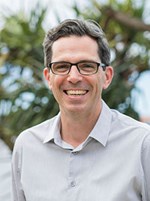 Daniel is a cognitive psychophysiologist with a keen interest in the biological aspects of psychology.

He leads the Thompson Institute’s Youth Mental Health and Neurobiology program. This includes the ground-breaking Longitudinal Adolescent Brain Study (LABS) which is tracking brain development throughout its most dynamic phase of adolescence. Through regular brain imaging and psychological and cognitive assessments, Dan’s team is building a world-first bank of data and aims to identify new ways to address the emergence of mental health disorders in young people.

His research program also includes novel imaging studies examining the time-course of neurotransmitters and the brain effects of glutamatergic agents (eg ketamine, alcohol). Other recent work has been to examine the neurobiological underpinning of alcohol-induced impairments in young people.

In addition to brain development, Daniel studies psychiatric and substance use disorders in young people. He has training and expertise in youth mental health, cognitive psychophysiology, neuropsychology, neuroimaging, substance misuse and clinical trials.

Dan’s prior work made significant contributions to the fields of ADHD and schizophrenia. His PhD research involved neurophysiological measures of central and autonomic nervous system activity in ADHD, the results of which have had profound implications for diagnosis and treatment. He was the first to describe sex-based differences in patterns of nervous system activity in ADHD and consequently helped to predict which patients would respond best to stimulant vs non-stimulant medication. The resultant two publications were each in the ‘Top 25 Hottest Articles’ list in the respective journals. His other major contribution to neurobiology includes reconceptualisation of the role of a biomarker for schizophrenia.

Over his career, Daniel has been a named investigator of grant funding totalling more than $6M. He has been invited to speak at national scientific meetings, community and professional forums including high schools, children’s hospitals, university colleges and medical programs. Daniel has made numerous oral presentations of this work at several international meetings (eg International Society of Affective Disorders, Society for Adolescent Medicine Annual Meeting, World Congress of Psychophysiology).

As a teacher, Daniel has made strong, sustained commitments to curriculum development and lectures of postgraduate programs. He is the program coordinator of the Mental Health and Neuroscience postgraduate program offered by the Thompson Institute. He is also an extremely dedicated supervisor of higher-degree research students, having supervised more than 30 PhD, MPhil and honours students.

2012-15: Kate Chitty, PhD, Discipline of Brain & Mind Sciences, University of Sydney. Thesis title: “The psychophysiology and in vivo neurochemistry of alcohol use in young people with bipolar disorder”.

HDR projects are available in the ground-breaking Longitudinal Adolescent Brain Study, particularly those involving brain imaging (EEG, magnetic resonance spectroscopy), cognition and onset of mental disorder. Topics include but are not limited to:

Adolescent brain study most ambitious of its kind

University of the Sunshine Coast researchers are about to embark on the most ambitious long-term study of the adolescent brain, and they’re calling on 500 local youths to get involved.