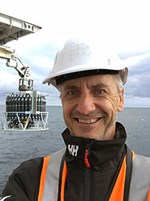 Professor Schlacher is the Director of USC’s ANIMAL Research Centre. The Centre serves as the focal point for excellence in animal-related research at USC, being the University’s premier platform for innovative work on the health of animals, and their ecology, evolution, behaviour and conservation.

Centre members emphasise work that spans disciplines and bridges fields in both fundamental themes and applied linkages to partners in industry and at all level of government. The ANIMAL Research Centre focuses particularly strongly on research students and early career researchers – an investment that reflects USC’s continual growth in animal research.

Interfaces are ubiquitous in the biosphere, forming hotspots of material processing, exchanges, biodiversity, and habitat heterogeneity. These interfaces couple ecosystems through the exchange of nutrients, material and organisms. I primarily work on two types of interfaces that represent the single longest interface on the planet – sandy beaches (as boundaries between the oceans and the land), and on interfaces that are sites of important interactions between society and coastal systems: estuaries. My published work and research projects examine both the structural properties of these interfaces and the processes which make them uniquely fascinating locations for ecologists. A major current effort in our research group is to identify the interplay of various drivers that shape fish assemblages in estuarine seascapes; what is increasingly evident is that a complex interaction exists between fish and the features of the seascape they inhabit. A similar effort is underway in the surf zone of ocean beaches, showing previously unrecognized diversity of fish in these dynamic environments. Some of the functional aspects which my lab investigates include the biological processing of animal carcasses at the land-ocean boundary (‘scavenger ecology’) and the role of carbon exchanges in spatially-coupled food webs (‘trophic linkages’).

The deep sea is the single largest biome of the planet, and perhaps the one last true frontier in ocean science. I have a long-standing interest and research stream in deep-sea ecology and conservation, focusing on seamounts (undersea mountains), continental margins, and submarine canyons. Each of these habitats is characterised by under-reported habitat heterogeneity and complexity of the seascape, and harbours highly diverse animal communities. My work has challenged conventional paradigms about elevated endemism and productivity of isolated topographic features, provided spatial data as biological input for conservation planning in the deep sea, and highlights the vulnerability of deep-sea systems to fishing and mining; the mining of the deep seabed has potentially massive environmental implications in coming years, and this aspect of my research (together with broader conservation questions) is gaining further momentum.

I strive to be ethically responsible by articulating my research work into society and the broader environment to achieve benefits beyond academia. To this end, a sizeable part of my research concerns questions about the environmental effects of human activities, and the strategies that are most effective in conserving vulnerable and irreplaceable features of the natural environment. There are several themes in this line of research: i.) the development of accurate pollution indicators in estuaries and marine waters (e.g. fish health, isotopes); ii) scientifically robust assessments of the consequences that urbanisation and recreation have for coastal dunes and beaches; iii) improvements to metrics used to gauge environmental conditions and monitor the effectiveness of management interventions; iv) evaluating impacts of bottom-trawling on seafloor communities; v) developing strategies to lower conflicts between humans and wildlife; and iv) the identification of areas of special biological significance on the High Seas. These projects involve international partners (e.g. ISA – International Seabed Authority, CBD – Convention on Biological Diversity) and a sizeable network of international collaborators.

4. Habitat Restoration: oyster reefs and beyond

In a world where options for conservation that seek to regulate detrimental activities of humans can increasingly be limited, restoring key habitats and ecological processes becomes a sensible and efficient option. Our group has over the last few years applied this philosophy to estuarine oyster reefs in Eastern Australia. These ecosystems collapsed near catastrophically around the middle of the last century to the point of being now quasi functionally extinct in many coastal systems. With sterling support from several key partners (e.g. Noosa Council, TNC, Noosa Biosphere Foundation, Healthy Land & Water) we have designed and installed a number of reefs with a ‘twist’: from the outset we have incorporated key lessons from modern seascape ecology, emphasizing connectivity of reefs to the mosaic of alternative estuarine habitats (e.g. mangroves, seagrass meadows) and the ocean (to facilitate recruitment of fish and oysters). More broadly, our ‘scientific philosophy’ to restoration involves explicit recognition of spatial principles long-established in biological conservation and empirical data on ‘habitat values’.

Key publications of Thomas Schlacher are also available from Google scholar and Researchgate.

Green sea turtle hatchlings getting caught in rubbish were among the worrying discoveries by USC students conducting a major clean-up of Fraser Island’s beach front.