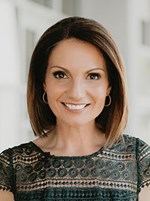 Rosanna Natoli works as a journalist and presenter for Seven News in regional Queensland.

​Rosanna has also taught at USC since 1999 and is passionate about sharing her professional practice as a television journalist and presenter with students, including by supervising and mentoring students in internships and special projects. In 2014, she received an Award for Excellence in Learning and Teaching for Sessional Staff, recognising her contribution to innovative learning experiences in the creation of a weekly television news bulletin, USC TV News.

Stay in touch with Rosanna at: