A Gympie author whose award-winning novels for children and young adults have been published in Australia, America and Britain since she graduated from USC in 2006 is this week inspiring the next generation of readers and writers on the campus that changed her life.

Karen Foxlee, 48, who shaped the first of her six books during a USC Bachelor of Arts (Communication) majoring in Creative Writing, is giving talks to school children in Years 4-9 at the Voices on the Coast literature festival on campus at Sippy Downs.

Immanuel Lutheran College and USC are presenting the festival on Thursday 18 July and Friday 19 July.

“I love talking to kids about stories, how writers get ideas out of their heads,” she said. “I talk about the importance of stories, why we need them, the power they hold.”

Ms Foxlee has proven the power of her own pen in five novels and a picture book, including her latest work, Lenny’s Book of Everything. The uplifting story about being different won the children’s category of this year’s Australian Independent Book Awards and is shortlisted in the 2019 Children’s Book Council of Australia Awards.

“It may sound cheesy but following my heart and writing the stories that I want to write has been my biggest achievement,” said Mt Isa-raised Ms Foxlee, who became a nurse in her 20s after dropping out of an Arts degree in Brisbane.

“I still work as a nurse part-time and I’m a single parent to an 11-year-old so different stages of her life have meant different challenges in my writing. This success has given me more time to live a creative life.”

She said the mentorship of USC lecturers had been instrumental in launching her professional career as an author.

“I’d wanted to be a writer since I was in Year 2 but as a young adult I could never finish anything I wrote. I was a perfectionist. I wrote the same paragraph a hundred times.

“When I was 28, my dad died and I decided to do the things I’d always wanted to do, and one was enrolling in university to study creative writing.

“I enrolled at USC and started travelling to the campus from Gympie and what I learned really changed my life.”

She remembered submitting her first assessment piece to then lecturer, author Steven Lang.

“I was terrified because I had never shown anyone my writing and I had to hand in a finished piece of work, which became part of my first novel. He said it was amazing. When I walked out, I felt like I was floating. I thought, ‘this is it, I can be writer’.”

The Anatomy of Wings, published by UQP the year after she officially received her degree, won the 2008 Commonwealth Writers’ Prize for best first book in the South East Asia and South Pacific region.

The literary fiction novel told the story of the sudden death of a teenage girl in an outback mining town, from the perspective of the girl’s younger sister.

Ms Foxlee's top tip for aspiring writers? “Just turn up and write. Get words on the page. It’s not always going to be good, but just turn off that internal editor, that horrible perfectionist, and come back later to make it better. That’s how university helped get the story out of me.” 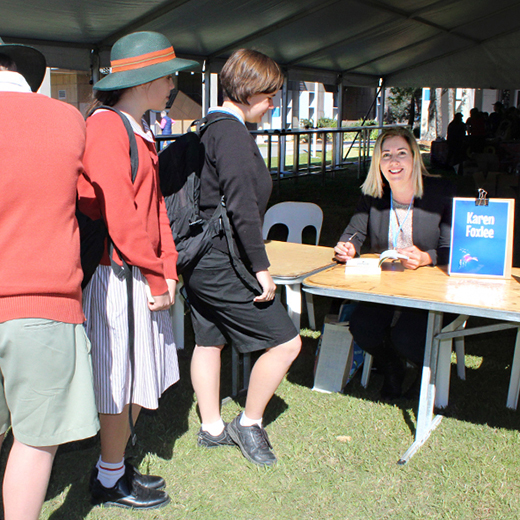