Nineteen-year-old Thomas said he was not surprised by figures showing that despite once being a male dominated profession, Australia now has fewer than two in 10 men teaching in primary schools.

“Growing up with only female teachers I never had a male role model in the classroom,” said Thomas, who balances full-time study with work in technical support at Star of the Sea Catholic Primary School and as a shift manager at McDonalds.

“I believe that it is important that students are taught by both men and women, as they may find it easier to relate to one or the other and can end up with a more rounded perspective,” he said.

“Men should not be afraid to give primary school teaching a go. The rewards and benefits are incredible, and I am looking forward to becoming a role model socially, academically and psychologically for young children.”

For Michael, teaching is the career change he has always wanted, after starting a Bachelor of Commerce (Management) at a Sydney University following high school and working for 20 years in various sales and management roles.

“I can only recall three male teachers at primary school and despite always having an underlying desire to teach, my initial career reflected a widely-held misconception that primary school teaching was not a masculine profession,” he said.

“Having finally taken the plunge, I do not regret leaving full-time work for a second and look forward to the challenge of soon having my own class full of young minds to shape and mould.”

Michael said despite being one of the oldest in his cohort at USC Fraser Coast, it was refreshing to study with like-minded and ambitious students.

“The sense of community is great to be a part of and contribute to. Both staff and students want to see everybody succeed and work at building each other up,” he said.

Thomas said he initially chose to study at the campus in Hervey Bay so he could continue to live at home, play and coach local football and maintain his work as an agent for a registered charity that works to protect vulnerable children in Nepal, India and Uganda.

“After my first few weeks of university, I really saw the benefits of choosing USC Fraser Coast as I am able to have frequent one-on-one conversations with my lectures who are so enthusiastic, caring and approachable,” he said.

“I have formed tight friendships with my peers which improved my networking skills and allows me to gain a deeper understanding of the content being taught.” 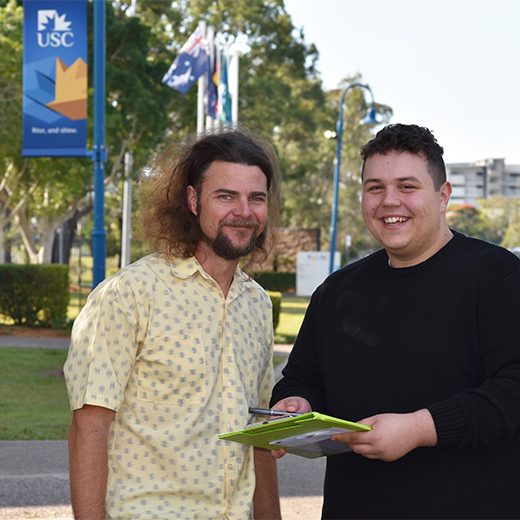