Hervey Bay’s Annabelle Healy has had her heart set on becoming a midwife since she was a child, and now a special USC scholarship is helping her live away from home as she chases that goal.

The 2018 Urangan State High School graduate has received a June Canavan Regional Scholarship, worth up to $20,000, to support women from the Fraser Coast and Gympie regions to embrace higher education.

“This allows me to move and study for my dream career,” said Annabelle, who started a Bachelor of Midwifery at USC’s Sunshine Coast campus this week.

“My sister Emmalynn was able to complete her Commerce degree at USC’s Fraser Coast campus, but unfortunately I could not study locally as I wanted to enrol in Midwifery,” she said.

“Leaving home to attend university is financially hard. This scholarship will help cover accommodation and other expenses, so I can spend more time studying and focusing on my degree and less time working to support myself.”

Introduced in 2017, the June Canavan Regional Scholarship is awarded each year to one high achieving first-year female USC student from a regional area who shows leadership potential in a sport and health science discipline.

The scholarship is in recognition of respected Sunshine Coast sports physician Dr June Canavan, who died in a plane crash in 2009 and who spent her younger years growing up in a country area.

“Scholarships such as this are so important,” Annabelle said.

“It is much harder for regional students as sometimes the only option is to move away from home to gain the degree and career we want.”

Annabelle, who received an OP5, said she was inspired to become a midwife by the thought of being able to assist women as they began their journeys as mothers.

“Also, to be the first person to hold a human life as they enter the world is such an important and fulfilling role,” she said.

Annabelle said she was keeping it in the family when she chose to study at USC.

“My sister, who is now working as a graduate accountant at a Hervey Bay firm, loved her time at USC which made me want to go as I heard all the amazing stories and experiences she had,” she said.

Annabelle said she was relishing her university experience so far and was settling into campus life and tertiary study.

“I really loved going to Orientation Week and exploring all that USC has to offer and I am excited to start lectures and tutorials,” she said.

Annabelle plans to return to the Fraser Coast to work as a midwife when she graduates.

“I want to give back to my community and those who will have supported me while I gain my degree,” she said. 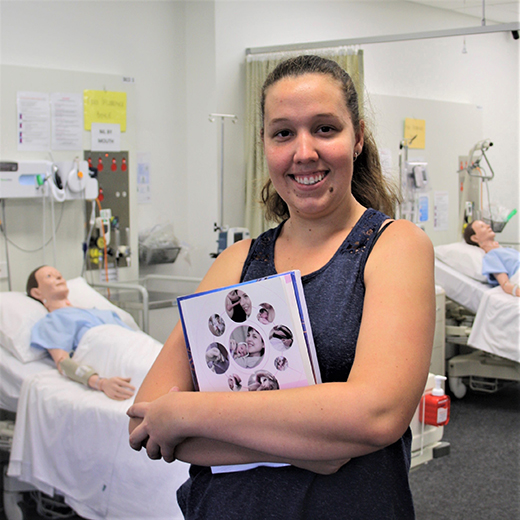