Mr de Brenni and USC’s Vice-Chancellor Professor Greg Hill unveiled the plaque for the $9million stadium extension in front of a capacity crowd attending the Suncorp Super Netball round 5 clash between Sunshine Coast Lightning and the Giants.

At an official function prior to the game, Mr de Brenni congratulated all involved in the State Government funded project, especially local construction company Evans Built, as he opened the venue on behalf of Deputy Premier Jackie Trad, who is Lightning’s patron.

The extension has increased the stadium’s capacity from 2,000 to 3,000 seats and provided new athlete changerooms, function room, sound system, designated seating for those with a disability, and public bathrooms.

Mr de Brenni said the upgraded USC Stadium would play an important role in supporting netball, which has the highest participation rate of any sport in Queensland.

“This is another extremely sophisticated, first-tier sporting facility for a sport that is predominantly played by women,” he said.

“We were very pleased to put some funding behind this to not only help deliver what truly is another world-class venue for women’s sport in this State but also to continue to support job growth in this community.

“There were over 500 local tradesmen and tradeswomen inducted on to this site over the course of the building project.”

After the official opening on Saturday, Lightning christened the stadium with a resounding 72-61 victory over the Giants, much to the delight of the partisan Sunshine Coast crowd. 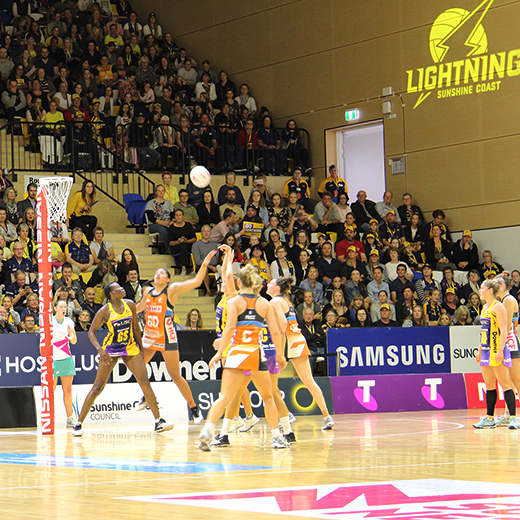