Forest ecologist Dr Andy Marshall, who is an ARC Future Fellow, said USC was one of almost 100 institutions involved in the global study that tracked 300,000 trees over 30 years.

The study, led by the University of Leeds, was published overnight in the journal Nature.

It reveals that a feared switch of the world’s undisturbed tropical forests from a carbon sink to a carbon source has begun.

Intact tropical forests are well-known as a crucial global carbon sink, slowing climate change by removing carbon from the atmosphere and storing it in trees, a process known as carbon sequestration. Climate models typically predict that this tropical forest carbon sink will continue for decades.

However, the new analysis of three decades of tree growth and death from 565 undisturbed tropical forests across Africa and the Amazon has found that the overall uptake of carbon into Earth’s intact tropical forests peaked in the 1990s.

By the 2010s, on average, the ability of a tropical forest to absorb carbon had dropped by one-third. The switch is largely driven by carbon losses from trees dying.

The research provides the first large-scale evidence that carbon uptake by the world’s tropical forests has already started a worrying downward trend.

Study lead author Dr Wannes Hubau, a former post-doctoral researcher at the University of Leeds now based at the Royal Museum for Central Africa in Belgium, said: “We show that peak carbon uptake into intact tropical forests occurred in the 1990s.

“By combining data from Africa and the Amazon we began to understand why these forests are changing, with carbon dioxide levels, temperature, drought, and forest dynamics being key.

“Extra carbon dioxide boosts tree growth, but every year this effect is being increasingly countered by the negative impacts of higher temperatures and droughts which slow growth and can kill trees.

“Our modelling of these factors shows a long-term future decline in the African sink and that the Amazonian sink will continue to rapidly weaken, which we predict to become a carbon source in the mid-2030s.”

Dr Marshall, who works at USC to measure and improve the management of threatened ecosystems, said the work resulted from painstaking work measuring trees across the world by hand, involving hundreds of field researchers.

“The striking implication from all this is that it appears the tropical carbon sink may be disappearing, first in Amazonia, then in Africa, which means that we really must reassess global targets for reducing greenhouse gas emissions,” Dr Marshall said.

His research assessed the impacts of tropical forest damage on plant and animal biodiversity, population density, and biomass.

He mainly works in tropical forests with a focus on Tanzania in Africa. His data has contributed to continental, tropical and worldwide assessments of species, biomass and productivity.

Dr Marshall is among 80 experts in the USC Forest Research Institute, which was launched today. 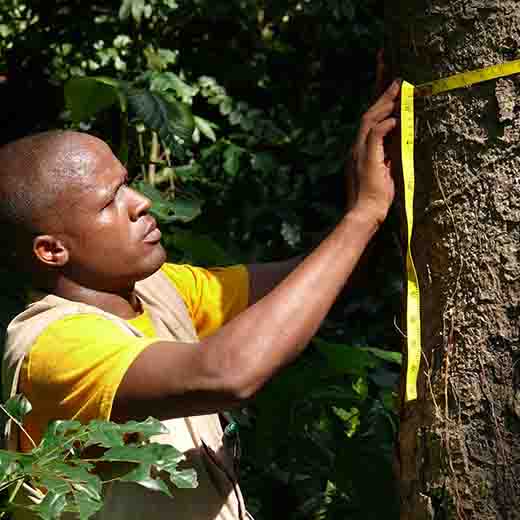