The study, based on two patient cohorts in the UK and Hungary, also involved Semmelweis University in Budapest.

Its findings were outlined in the 28-year-old’s first postdoctoral paper as joint lead author, published in the Proceedings of the National Academy of Sciences of the United States of America.

Dr Chandler, a molecular biologist who has worked at the ICH in London for three years, was recently awarded funding for a trip to Yale School of Medicine in the US to continue her breakthrough research when COVID-19 travel restrictions are lifted.

The London resident said she was excited about the results, the opportunity to further investigate how and why the defect damaged certain organs, and the potential to find therapies to help families affected by kidney disease in the future.

“We used genetic sequencing to study the patients’ DNA – the unique set of instructions that control how the body grows, works and looks,” Dr Chandler said.

“Key ‘spelling mistakes’ were found in these instructions, in an area of DNA responsible for a process called pseudouridylation. This process is critical for the healthy functioning of cells.

“To learn more, the team developed a laboratory model of the genetic problem, using zebrafish. The fish developed the same kinds of symptoms seen in both patient cohorts, such as kidney failure, cataracts, hearing loss and inflammation of the intestine.

“From this, we were able to demonstrate that disruption of pseudouridylation and its impact on cell functions is a key feature of this new syndrome.”

GOSH consultant paediatric nephrologist Dr Aoife Waters said, “This work provides a great example of how understanding rare genetic mutations from our patients at GOSH can help us understand broader disease mechanisms. It is the first to describe defective pseudouridylation in the context of kidney disease, adding to our understanding of childhood renal failure.”

Dr Chandler won Best Abstract Award out of more than 500 submissions at UK Kidney Week 2019 and was funded by The Genetic Society to present her work in Berlin.

“We selected the zebrafish because it carries a version of the gene that is very similar to that of humans, making it a great model system to study the process of pseudouridylation,” she said.

“It also has a primitive kidney that is similar to the same organ in mammals, so it is a great model organism to study kidney development and damage in the context of human disease.”

Dr Chandler, who had moved from the UK to the Sunshine Coast in 2013 on an international scholarship, said she was applying methods and techniques learned during her USC studies.

“Dr Chandler’s postdoctoral position at UCL is prestigious, as is her new paper’s publication in the Proceedings of the National Academy of Sciences,” he said.

“She has worked with a team from top research institutes to produce a paper that identifies a mechanism leading to illness in children. It is her ninth publication overall, and I expect there will be many more.” 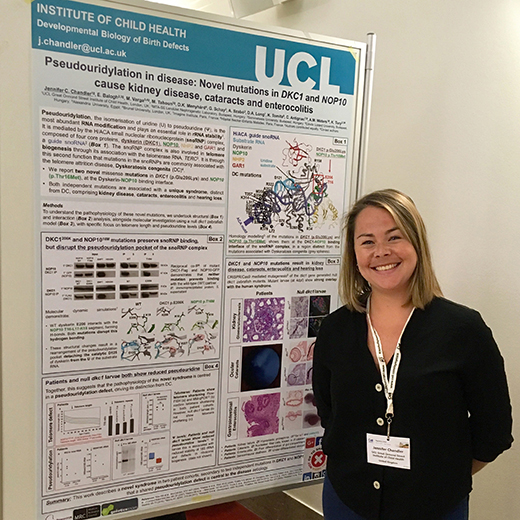