An exhibition exploring the history and site of the 1838 Myall Creek massacre through the work of some of Australia’s leading Indigenous artists is expected to challenge visitors to take a new look at history.

The touring exhibition Myall Creek and beyond from the New England Regional Art Museum (NERAM) will open at the USC Art Gallery at Sippy Downs on Monday 1 February.

It also includes the Myall Creek Gathering Cloak made by members of the local community working with Carol McGregor.

NERAM Director Rachael Parsons said the evocative exhibition was a partnership between the art museum and the Friends of Myall Creek Memorial, with the tour supported by Visions of Australia.

“The exhibition theme and content are challenging, but it is vitally important that we acknowledge and discuss these aspects of Australia’s history, and that First Nation People’s voices lead those discussions,” she said.

“The participating artists visited the Myall Creek memorial site near Bingara, attended the 2017 memorial event organised by the Friends of Myall Creek Memorial on the anniversary of the massacre, and met with members of the local community to talk about its significance to them.”

The exhibition commemorates the Myall Creek massacre in NSW, which saw 28 Aboriginal people murdered by a group of 11 convicts and ex-convict stockmen led by a squatter.

Although there were many other massacres of Indigenous people across Australia, this one had special significance because it was the only time that white men were arrested, charged and hung for the massacre of Aboriginal people, following a police investigation.

Guest curator Bianca Beetson said the artists selected for this exhibition were chosen for their ability to create work that deepens the conversation.

“All of them, in different ways, interrogate dialogues surrounding Aboriginal massacres, frontier wars and hidden histories, whether it’s through the artists creating work which responds to the place ‘Myall Creek’, or the artist’s broader response to issues surrounding Australia’s frontier history,” she said.

“This presented a challenge when curating this exhibition, as was I faced with trying to curate work that authentically engages with the story of atrocities such as Myall Creek, but at the same time I was mindful of not triggering trauma in Aboriginal and Torres Strait Islander audiences who share this dark history.”

The exhibition will be on display at USC Art Gallery from 10am on Monday 1 February to Saturday 24 April. 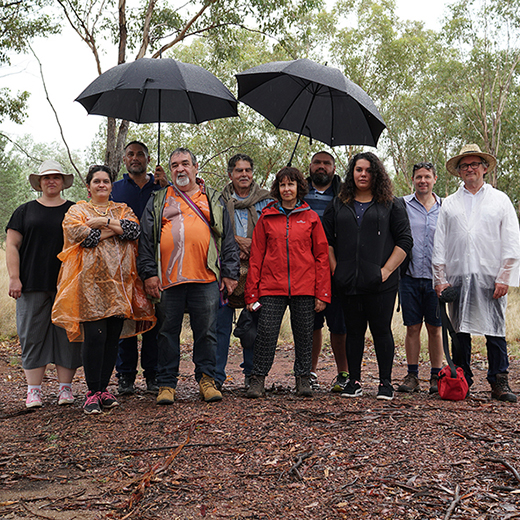