The genome of the spotted gum Corymbia citriodora subsp. variegata is the second fully assembled reference genome published for the eucalypt group and will be the reference genome for the genus Corymbia, known as the bloodwoods.

The Corymbia reference genome was published in the Nature journal Communications Biology and is hosted alongside the Eucalyptus reference genome by the US Department of Energy Joint Genome Institute for access by scientists worldwide.

Dr Lee said Corymbia is the closest lineage to the main eucalypt lineage (genus Eucalyptus), which comprises over 750 species and dominates most of Australia’s forests and woodland.

He said by comparison there are about 100 species of Corymbia, primarily in northern and eastern Australia.

“The species chosen for sequencing grows naturally along the north-east coast of Australia and is grown in plantations in Queensland, northern New South Wales and other countries such as China, Brazil and South Africa,” said Dr Lee, who has led the Australian breeding efforts with the bloodwoods.

“This reference genome will be invaluable for future gene discovery and help the breeding of bloodwoods for uses including timber and biomass production, carbon sequestration and even essential oil and charcoal production”.

The major task of refining the genome assembly, however, was completed in the USA when the lead scientist, Dr Adam Healey, moved to the HudsonAlpha Institute for Biotechnology after working on the project as part of his PhD at the University of Queensland.

Professor Brad Potts from the University of Tasmania described achieving a full genome assembly as completing a “mega project”.

“It is one thing to sequence a genome but quite another to stitch the millions of tiny bits of sequence together into chromosomes and reliably position genes – especially when done independent of other genome assemblies to allow comparative studies,” he said.

Corymbia and Eucalyptus are thought to have diverged about 60 million years ago – after the last mass extinction of the world’s plants and animals, including the dinosaurs – when Australia was still linked with Antarctica.

Dr Jakob Butler, whose PhD work at the University of Tasmania helped with the genome assembly, said: “These eucalypts show extensive similarity in genome structure despite their ancient separation, which while surprising is useful from a practical perspective for transferring information on which genes affect which traits – but we did discover key structural differences for the first time between these genera”.

Some of the differences found between Eucalyptus and Corymbia were in gene families related to disease inhibition and aridity adaptation.

Dr Jules Freeman of Scion New Zealand and previously of the University of Tasmania said: “The assembly and annotation of the bloodwood genome helps cement the eucalypts as a model group for genomic research in forest trees”. 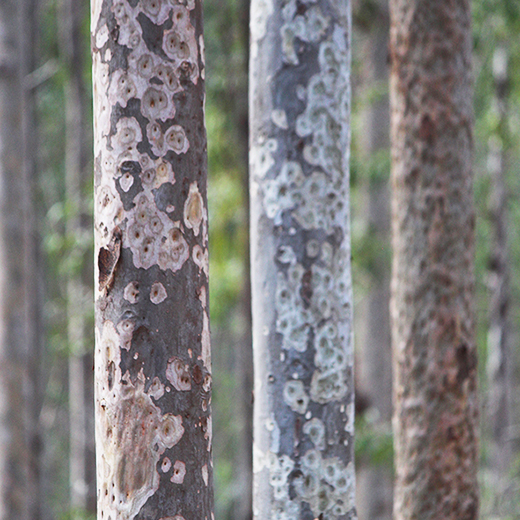 As demand for timber grows amid a global shortage, a University of Sunshine Coast researcher will represent Australia on the world stage with an innovative climate positive project that is creating new opportunities for plantations of highly aromatic sandalwood.