A field trip by two USC PhD students turned into a rescue mission for a sick green sea turtle today in waters off Hervey Bay.

Sunshine Coast-based USC students Jesse Mossman and Bob Gorisson said they knew the turtle was in trouble when they saw it bobbing up and down in the water.

“Every time it would try to dive down it would come straight back up, almost upside down, so we knew something was wrong,” Bob said.

“We grabbed it onto the boat and made our way back to shore to hopefully get some help for it.”

A volunteer for Wildlife Rescue Fraser Coast met the students at the Urangan Boat Ramp. It is expected to be taken to Australia Zoo’s sea turtle rehabilitation centre for treatment.

“This can be caused by two things, a parasite infection or the ingestion of marine debris,” said the Senior Lecturer in Animal Ecology.

“In both cases, the gut has limited its ability to digest food and gas builds up in the turtle’s body, preventing it from diving down and feeding.

“Hopefully, the care it gets from the amazing team at Australia Zoo’s Wildlife Hospital will allow it to be returned to the wild.”

The students were on a field trip conducting terrain mapping and setting up remote underwater video stations as part of research projects into groupers and scavenger fish species found on natural and artificial reefs around Hervey Bay.

“There were actually lots of turtles out there where we found this one and they were big, healthy ones, which was really nice to see,” Jesse said. 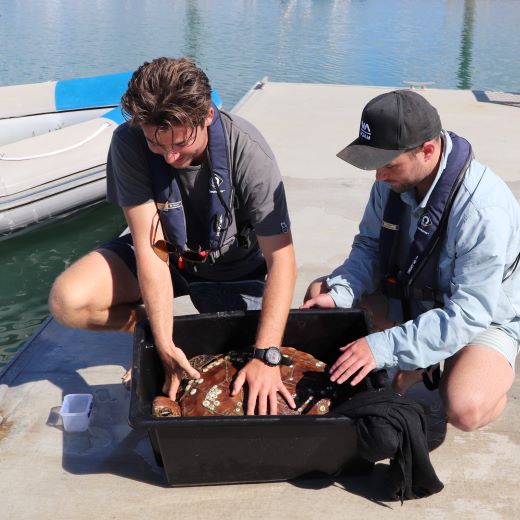