Professor Nunn and USC Adjunct Professor Johannes Luetz have co-edited a new book, Beyond Belief: Opportunities for Faith-Engaged Approaches to Climate-Change Adaptation in the Pacific Islands, which features 20 chapters by experts from Australia, the Pacific Islands and Europe.

The book, published by Springer, will be launched at USC’s Sunshine Coast campus at Sippy Downs on September 21. Register here.

Professor Nunn said spending 35 years in the Pacific had shown him that the approaches used to communicate the risks associated with climate change in Australia and elsewhere would not work there.

“Most Pacific Island people – and I’m talking 98-99 per cent – are spiritually engaged to the extent their religious beliefs (mainly Christian) inform their world views and basically guide their everyday decision making,” he said.

“If a scientist comes in and talks science then they’ll all sit very politely and listen. But as soon as the scientist is gone, they’ll say: ‘Why is God doing this to us?’ and ‘What does God expect us to do about it?’.

“So I really wanted to write something about that insight because I think that many countries, including Australia, have been getting it wrong for a long time”.

Professor Nunn, who is the Co-Director of USC’s Sustainability Research Centre, said despite millions being spent over decades to help Pacific Islander people cope with the effects of climate change he could not point to a single intervention that had succeeded.

“This is especially true among older generations who have a great deal of influence in their societies. We need to understand what their value system is and how to engage with that value system to get results.” 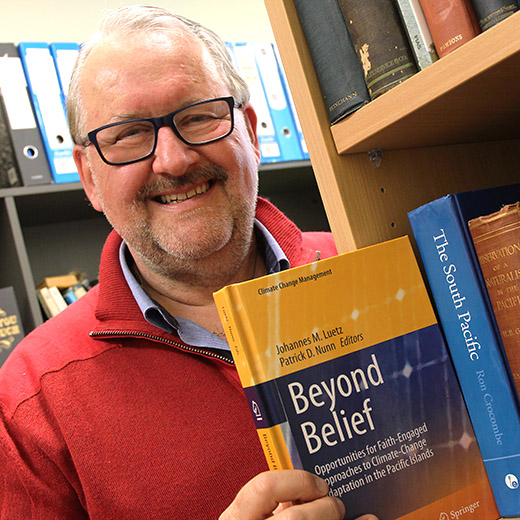 The University of the Sunshine Coast is part of a global network working to boost food provision and nutrition education in Pacific Island nations, where obesity rates are among the highest in the world.