The Book of Everything will delight everyone - University of the Sunshine Coast, Queensland, Australia

The Book of Everything will delight everyone

USC drama students will soon present a highly acclaimed children’s play about a kind boy with a wild imagination and some very strange friends.

Esteemed Brisbane director and actor Caroline Dunphy is directing the USC Theatre production of The Book of Everything that will be staged at Chancellor State College’s Performing Arts Centre from 29-31 January.

“I was inspired to direct this piece because it is an exploration of real-life issues through a child’s imagination,” she said. “It’s such a beautiful, poetic and insightful play where we see the world through a child’s eyes.”

The main character is nine-year-old Thomas, who lives in post-Nazi Amsterdam and can see things no-one else can: tropical fish living in the canals, trumpeting sparrows and a deluge of frogs.

He also sees the unhappiness of his family and the pain that lingers long after the war is over. He carefully records all of his observations – good and bad – in his magical and hopeful Book of Everything.

Despite some serious subject matter, USC Lecturer in Drama Dr Jo Loth said the play was a joyous tribute to imagination and would appeal to anyone aged 9 to 99.

“We encourage adults and children alike to come and see this play which will be performed and produced by USC Drama students,” she said.

“It has been an invaluable opportunity for the students to work with a professional director and they have learned so much about acting and theatre industry practice.

“We invite the Sunshine Coast community to come and enjoy the results of their hard work and talent.”

The lead role of Thomas will be shared by three actors (pictured seated left to right): Kurtis Laing, 19, of Buderim; Anthony Borsato, 22, of Mapleton; and Thomas George, 19, of Sippy Downs.

The play is suitable for children aged 9 and older but contains depictions of physical violence, so parental guidance is recommended.

The Book of Everything was adapted by Australian playwright Richard Tulloch and based on a book by popular Dutch children’s author Guus Kuijer.

The Australian production of this play took New York by storm in 2012. A New York Post theatre critic wrote: “It’s not quite right to say that The Book of Everything is one of the best children’s shows in town. It’s one of the best shows, period. It never talks down to its audience. It’s as dark as it is uplifting, as poignant as it is raucously funny … It is warm, witty, wise and wonderful.” 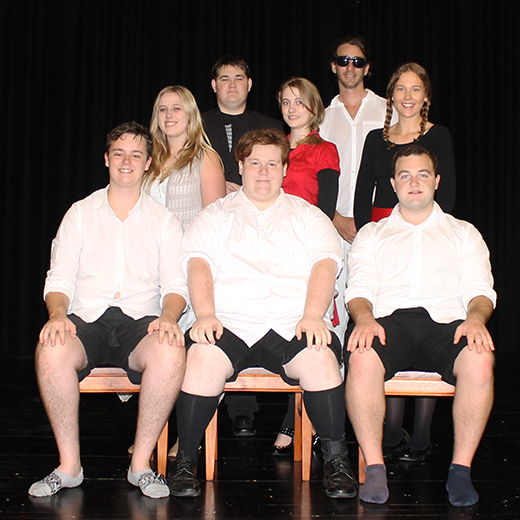