A PhD student from the University of the Sunshine Coast is filling vital gaps in knowledge about the sexual development of an Australian lobster species at risk of over-harvesting.

Jennie Chandler is working with USC Aquaculture Biotechnology Research Fellow Dr Tomer Ventura on the research which has big potential to benefit the aquaculture industry and alleviate pressure on wild lobster populations along the coasts of New South Wales and Tasmania.

“I’ve basically been looking at what makes these lobsters all born male,” she said.

“When further research puts all of these elements together, we’ll have identified the entire sex determination pathway, which may then have practical applications.”

Hormone treatments already practised in poultry and cattle can change the sex of populations for commercial and environmental reasons. USC researchers are developing treatments for fish and crustacean species.

Ms Chandler, 23, came to Australia from England’s University of Exeter in late 2013 to become a student member of USC’s burgeoning Genecology Research Group.

“The opportunities I’ve had here are amazing,” she said. “I’ve worked on lobster sampling in Tasmania and modelling in Perth and I’ve attended conferences in Sydney and Adelaide. USC is a fantastic way to meet people and explore Australia’s scientific community.”

Her scholarship study is part of Dr Ventura’s $370,000 Discovery Early Career Research Award from the Australian Research Council. Further funding was provided by a USC Collaborative Research Networks grant, including collaboration with the University of Tasmania and Curtin University.

Dr Ventura said: “Identifying these genetic sex markers is a very important milestone for this joint research. It is invaluable for the sex change technology and will enable much faster quality assessment.

“Previously, we had identified sex markers in commercially important freshwater prawns. This is the first time the markers have been identified in the spiny lobster.” 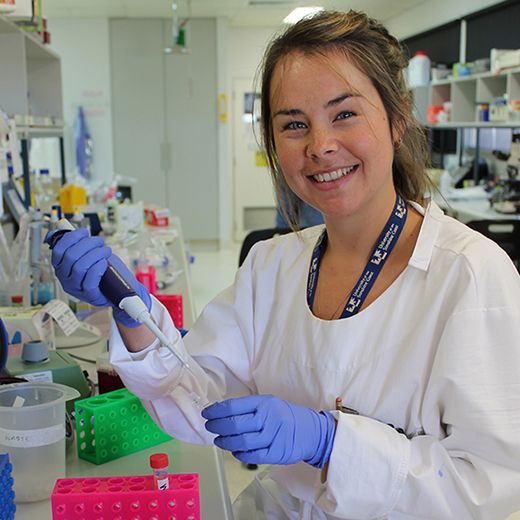