A University of the Sunshine Coast student’s ground-breaking flood mitigation project has earned him a competitive state-wide water industry award.

Scott’s USC thesis project was to develop an innovative floating wall that would prevent stormwater from flowing into underground carparks in a flood event. He has now patented the technology.

Scott, from Parrearra, is working as an undergraduate water engineer for the Sunshine Coast branch of infrastructure company SMEC.

He said he was thrilled to hear his name called out at the AWA Awards, held at the Sofitel Hotel in Brisbane, after submitting an extensive application about his research.

“I didn’t know until the night and I was pretty honoured to receive a prize like this,” Scott said.

“This is a project I started back in first year and I’ve been developing it since then with the help of a grant from USC.

“I had heard about problems with flooding in underground car parks at some engineering networking events.

“This floating wall design creates a seal and intercepts the water before it can go down driveways into underground carparks. We’ve now got a full-scale model on campus.”

Scott is now in the running for the AWA National Undergraduate Water Prize, which will be announced in Melbourne next year.

“It’s wonderful news for Scott and reinforcement of the quality of the Engineering graduates emerging from the University,” Dr Fairweather said.

“Scott’s talent was very apparent from the first time I came across him and the technology he has developed will grow in importance as our environment becomes subject to more and more flooding.” 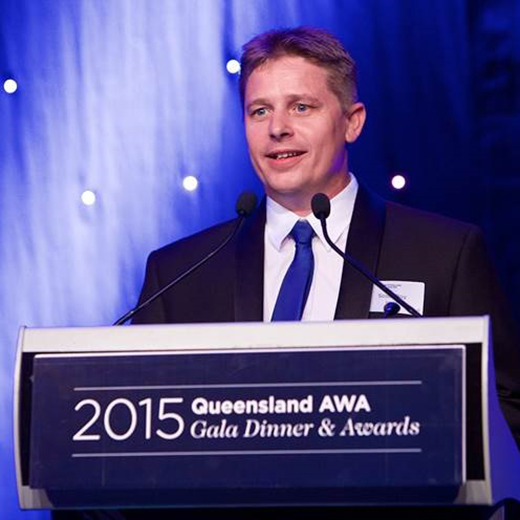