A shared passion for teaching and travel has led to two University of the Sunshine Coast graduates working just one floor apart in Binh Duong Province, Vietnam.

Bachelor of Arts graduates Michelle Kuehne and Hiromi Suda were working for two language schools located in the same office building in the southern Vietnamese city of Thu Dau Mot when a colleague introduced them last year.

The pair soon established that they were both USC graduates and had even completed the same majors in politics and international studies.

Michelle, the manager of EIU Language Centre and a former USC staff member, said her experience teaching English in Japan had prompted the director of Hiromi’s language centre to introduce his new teacher.

“I'm not sure who was more surprised,” she said. “I think everyone in the language centre would have heard our shrieks.

“I worked as assistant to the Dean of Business at USC from September 1995, before the Sippy Downs campus was opened, to May 2002 and undertook my Bachelor of Arts part-time.

In her time at USC, Michelle said she had enjoyed the opportunity to host a number of international students from Japan and Taiwan in her home.

Japanese national Hiromi, who graduated in 2001, said she had been delighted to find herself working nearby a fellow USC alumnus.

“I thoroughly enjoyed my three years on the Sunshine Coast,” she said.

“After graduating, I went home for three years and then found a position at a school in Brazil. Last year I started teaching in Becamex Tower in Vietnam, and that was where I had the big surprise of meeting Michelle.

“I think it’s great that our education at USC has helped us teach in different parts of the world – as well as in the same building.” 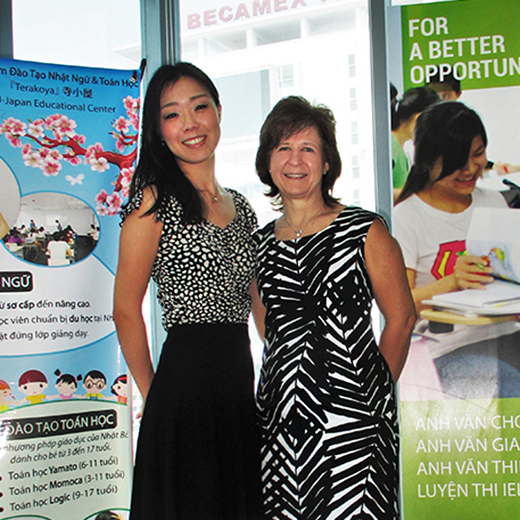