An Australia-wide touring exhibition by Aboriginal artist and 2014 Archibald Prize finalist Jandamarra Cadd will open at the University of the Sunshine Coast Gallery at 6.30pm on Thursday 18 February.

The exhibition, Jandamarra Cadd: Kinship, features 16 large-scale paintings that explore the complex and important connections of kinship within Aboriginal culture. It will be on show at the USC Gallery until Saturday 2 April.

The Sunshine Coast-based artist, whose origins are with the Yorta Yorta and Dja Dja Warung people in Victoria, will provide a free art lecture at 6.30pm on Wednesday 23 March to share stories about his work.

USC Gallery’s Acting Curator Lou Jaeger said Jandamarra hoped to reach as many people as possible to share his dream and passion for a united Australia, where the beauty and value of Aboriginal culture is viewed with equality and respect.

“Aboriginal kinship ties, values, belief, identity and language are maintained by the community, and the continuance of Aboriginal society is dependent on keeping Aboriginal families strong and healthy, both physically and culturally,” she said.

“It is the kinship ties that determine a person’s rites, responsibilities, interactions and behaviour.”

Ms Jaeger said she believed the highly detailed, emotive work would appeal to a wide audience.

To book a seat for the free artist lecture or to RSVP for the opening night, email Ms Jaeger at ljaeger@usc.edu.au

The gallery is located at the University campus on Sippy Downs Drive, Sippy Downs. It is open free to the public from 10am to 4pm Monday to Saturday and closed Sundays and public holidays. 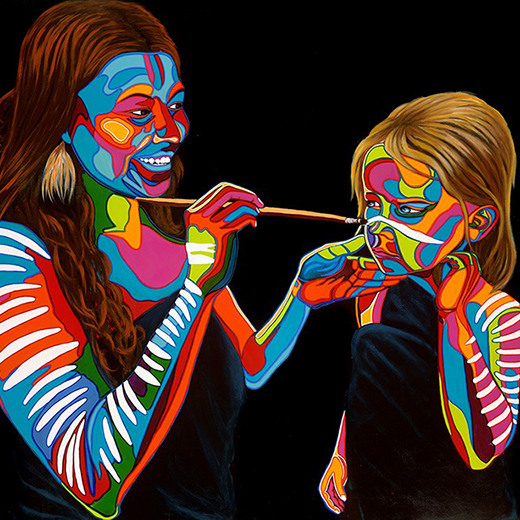