An international University of the Sunshine Coast researcher has travelled to the Philippines to design a better system of rehabilitating land that was previously cleared through ‘slash and burn’ farming.

PhD candidate Liz Ota, from Sao Paolo in Brazil, is undertaking a three-year project looking at how reforestation projects in the Philippines can be improved to suit landholders’ needs.

Ms Ota interviewed 79 landholders on Leyte Island in the Philippines’ central east to study how a pilot reforestation program from the 1990s, which replaced subsistence crops with forest, had affected the farming community.

Ms Ota said while planting trees on land cleared for agriculture had clear ecological benefits, reforestation projects needed to take into account the socioeconomic conditions of the people who owned the land.

“Reforestation is good for the environment and it can be a wise investment, but programs need to be designed for a very specific context and to consider the local people,” she said.

“For example, I’m dealing with landholders that own small plots of land, and they need to use that land to produce subsistence food crops and timber to build their homes.

“After the pilot program in this region, reforestation farming was adopted as a national strategy by the government of the Philippines, but it was based on very limited results.

“I’m hoping to come up with an improved model to ensure that smallholders have their needs met in reforestation efforts.”

Ms Ota developed an interest in ecological restoration and community forestry while studying in her homeland, before taking the opportunity to begin her PhD with USC’s Tropical Forests and People Research Centre in October 2014.

Ms Ota said some clear recommendations were already emerging one year into the project, and she hoped they could be applied beyond the Philippines, particularly in developing countries across South East Asia.

“By its nature, reforestation is a long-term endeavour, so local people need to be very aware that they will not be able to farm on that land for a number of decades,” she said.

“Landholders need to adopt these projects because of their own will, not because they’re persuaded to do so and not because they will receive financial incentives at the beginning.”

The study, titled ‘The Socioeconomic Function of Reforestation Projects in the Philippines’, is expected to be completed in 2017. Ms Ota’s supervisor is USC Professor of Tropical Forestry John Herbohn. 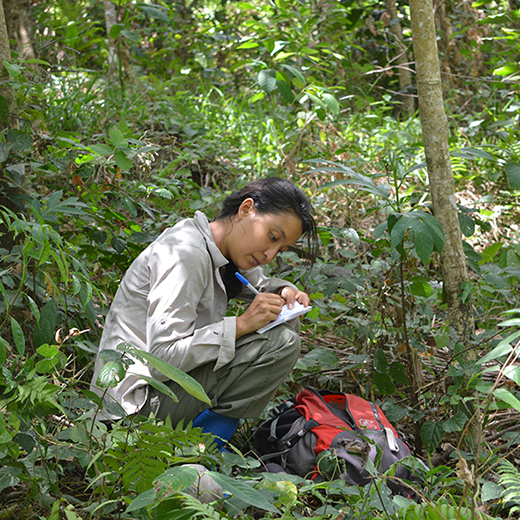