Top grades and the pursuit of science have encouraged 18-year-old Vanessa Hooper to become the third of her siblings to study at the University of the Sunshine Coast.

The 2015 dux and captain of Burnside State High School will start her Bachelor of Biomedical Science when Semester 1 opens at Sippy Downs on Monday 29 February.

“I’m particularly interested in research involving the development of personalised medicines to target specific cancers or diseases in an individual,” she said.

Vanessa achieved an OP1 just like her 20-year-old sister Kathryn, now studying a Bachelor of Science on campus at USC after enrolling in 2013.

Their elder brother Jono, the 2010 Burnside State High School captain, completed his USC Science and Honours degrees in three instead of four years and is now a full-time environmental scientist with local consultancy Future-Plus Environmental.

The trio of siblings from Woombye enrolled at USC because of its location and teaching quality.

“I wanted to stay local and continue to enjoy the Sunshine Coast lifestyle,” said Vanessa, who was a member of her school’s student representative council and received an Academic Honours and Caltex Best All-Rounder Award in Year 12.

“I’ve been told that class sizes are smaller and it’s much easier to get to know the teaching staff in comparison to a larger university. I was fortunate to attend a smaller school offering an excellent quality of education, which is what I expect to receive at USC.”

Vanessa became interested in the functioning of the human body after attending a seminar last year at the Queensland Institute of Medical Research.

“After reading the Biomedical Science course description at USC, I thought it aligned with my interests and would be a great opportunity to pursue my career.”

Kathryn, who received a $12,000 Chancellor’s Scholarship for academic excellence when she enrolled at USC in 2013, initially started Occupational Therapy before honing her interests in pure science and mathematics.

“After finishing my degree in the middle of this year, I’d like to go on to further study with a view to a career in academia,” she said.

Jono, who achieved an OP2 in Year 12, is now living his passion, working full-time in environmental science, involved with several waterway catchment organisations, and serving as president of the Queensland Frog Society. 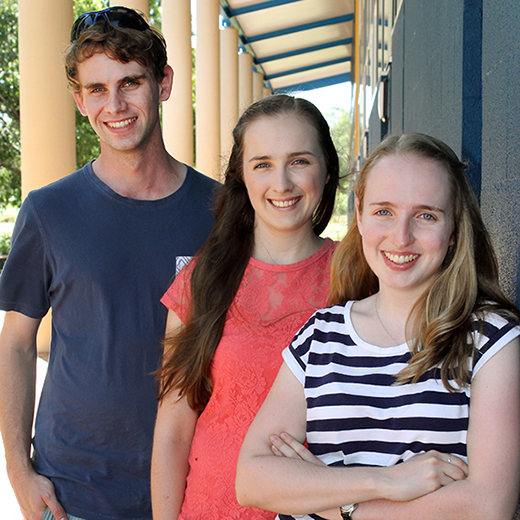