High-flying University of the Sunshine Coast graduate Lachlan Haycock of Nambour has taken his passion for Indonesian culture to the next level by undertaking Honours research in Yogyakarta in central Java.

Lachlan, 21, is studying an Honours degree at the prestigious Gadjah Mada University after receiving a competitive New Colombo Plan Scholarship, an Australian Government initiative that provides funds to help students study in the Indo-Pacific region.

The former St John’s College student graduated in April from a Bachelor of Arts (Indonesian) at USC with an impressive grade point average of 6.83 out of a possible 7, which earned him a University medal.

Lachlan, who was the first in his family to attend university, said he was making the most of the chance to further explore his passions for creative writing and Indonesian culture.

“My life in Indonesia is full of perplexing cultural paradoxes and steamy weather,” he said. “It really is an amazing opportunity to experience the new and the different, and hopefully learn a thing or two while I’m at it.

“I know that Indonesia will form a large part of my future academic and professional aspirations, although I am still working out the details.”

When he started his undergraduate degree at USC in 2013, the former St John’s College OP1 student was also presented with a $15,000 Renouf Family Scholarship, awarded on the basis of high academic achievement and leadership.

Lachlan said earning a University medal was a welcome surprise to cap off his time at USC.

“Even though I am quite proud of my academic achievements, winning a medal was not remotely on my radar,” he said.

“My degree was characterised by some great relationships with other Indonesian language and creative writing students and lecturers at USC.

“I also had the chance for some exciting relations-building with Indonesian students online and through in-country study programs in the summers.”

Lachlan was also one of 'The Next Big Things' in a chapter of USC's 20th anniversary celebration book, 'Visions', available now. For details go to www.usc.edu.au/story or contact the Co-op Bookshop at usc@coop.com.au 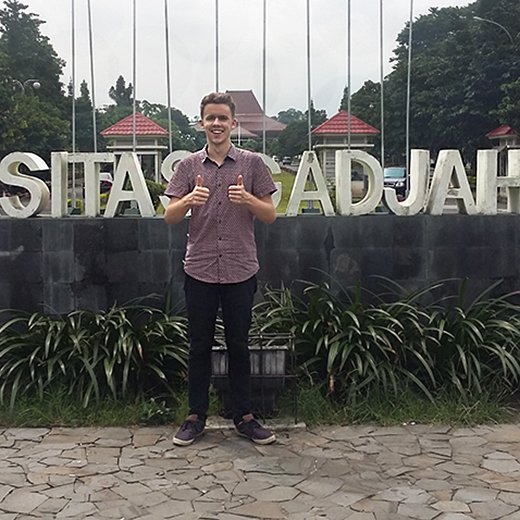