A team of University of the Sunshine Coast researchers has received funding to investigate how exercise might slow the progression of dementia.

The research, led by Associate Professor Dr Chris Askew, was one of only 100 projects selected for a grant under the Australia – Germany Joint Research Co-operation Scheme, a program run by Universities Australia and the Germany Academic Exchange Service (DAAD).

The $24,400 grant will allow early career researchers from USC to travel to the German Sports University (GSU) in Cologne for parts of the study. Their German counterparts will also have opportunities to conduct research at USC.

Dr Askew said while exercise had already been shown to help people with early signs of Alzheimer’s Disease or dementia, this project would look at the underlying mechanisms and the role that blood flow to the brain could play in the process.

“As we age, the vessels that supply that blood can lose their responsiveness. Our initial studies are testing whether older adults with mild cognitive impairment – a precursor to dementia – have that limitation, and whether it impacts blood flow during exercise.”

Participants in the USC studies will engage in cycling and squatting exercises while having the vascular responses of their brains tested – testing that could eventually lead to new forms of rehabilitative exercise therapy.

“We want to find out what effect simulated exercise has on brain blood flow, which will enable us to separate the physical aspects from the mental stimuli,” he said.

“Simulation, or even thinking about exercise, might be a feasible rehabilitation option for patients with cognitive or physical impairments, caused by strokes or dementia, who cannot physically exercise.”

Dr Askew said the exchange opportunities for researchers between USC and the German university were extremely positive.

“One of our PhD students, Timo Klein, has just returned from a six-week visit to the German university, where he carried out brain blood flow studies in more than 70 older adults with mild cognitive impairment,” he said. 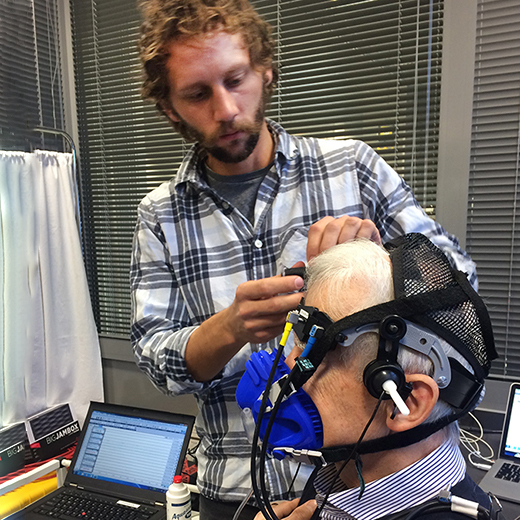