University of the Sunshine Coast Journalism graduate Tom Snowdon is helping to break some of Queensland’s most talked-about news stories in his role as a reporter for The Courier-Mail.

Tom, 34, who grew up on the Sunshine Coast, was one of almost 1,350 students to graduate from USC earlier this year and is now making the most of his opportunities at the large Brisbane-based newspaper.

He was in his final year of university when he secured the job, which sees him regularly share bylines with some of the State’s most respected journalists.

Tom said he was travelling overseas when he received an email from one of his lecturers about an internship opportunity at The Courier-Mail.

“She strongly encouraged me to consider it, but it meant cutting my trip short,” he said.

“After some contemplation, I decided to come home and take the internship. I learned a lot, got a lot of experience and that created a pathway to a graduate program on offer here at The Courier-Mail.”

After a year, Tom accepted a permanent role that has seen him reporting on crime, local government matters and general news.

He said he only became interested in journalism as an adult after dabbling in some music and travel writing.

“I’ve always been quite an avid reader and I found that I really enjoyed books that had been written by journalists,” he said. “I worked in the music industry and had tried some music journalism as part of that.

“I also did a lot of travelling and met a lot of journalists along the way. More and more I felt drawn to the profession.”

The keen surfer said he initially chose to study at USC so he could remain close to the beach.

“Once I had started the Journalism program, though, I pretty quickly discovered the quality of the lecturers and tutors,” he said. “That’s what really made the degree for me.

“They were all so knowledgeable about the industry, and were all still heavily involved in some way. Their passion really rubbed off on me. It was infectious.”

USC Lecturer in Journalism Dr Jane Fynes-Clinton said Tom’s combination of practical skills and passion meant he was well prepared for the challenges of a daily newsroom.

“As a student, Tom had no boundaries as far as what he would tackle story-wise, which made him well suited to a daily metro newspaper,” Dr Fynes-Clinton said.

“He also wasn’t your typical intern. He went into the newsroom with some quality stories that he’d generated himself, which is something we encourage students to do to stand out.” 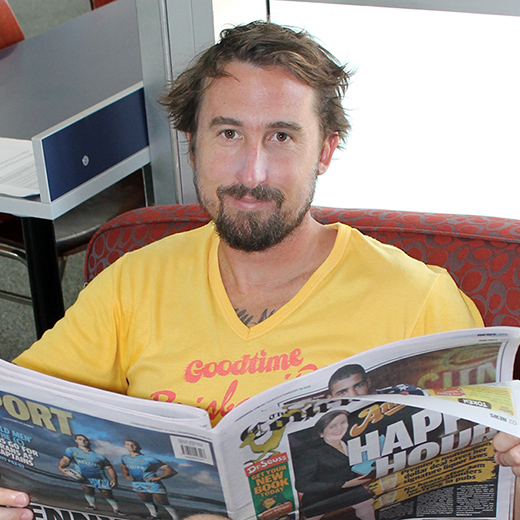