A passionate photographer on a 10-year odyssey to record the rich diversity of wildlife on the Sippy Downs campus of the University of the Sunshine Coast will become an Honorary Senior Fellow.

Gerard Mills, who has devoted much of his life to education, art and photography, will receive the honorary award at the USC Graduation Ceremony from 9am on Thursday 29 September.

It will be the first of four USC ceremonies on 29 September at the Matthew Flinders Anglican College Performance Centre, Buderim. (USC’s Sports Stadium is being renovated.)

Media are invited to these final USC graduations for 2016. About 1,900 people, including 450 graduands, are expected to attend this Thursday 29 September.

He has captured the fascinating behaviours of everything from the tiniest beetles to the biggest kangaroos, from snakes and birds to bandicoots and sugar gliders.

One of his most exciting recent finds was taking the first known photo of the rare tiny spider, Corynethrix obscura, which he found in regrowth bushland near a lake.

Each image is geo-tagged in a collaboration with USC Animal Ecology scientists to record the extraordinary diversity of campus creatures and their habitats, behaviours and numbers.

“People tell me what I’m doing is invaluable, however when I started I just wanted to do a stocktake of the animals on campus,” said Mr Mills, who moved to the Coast several years ago to be near his daughter, Grace, an Education student at USC.

“I didn’t realise the impact this could have in contributing to the future knowledge and protection of campus wildlife.”

With his trademark brown hat and his impressive camera slung about his shoulder, Mr Mills is a regular sight on the Sippy Downs grounds, which are a native fauna and flora reserve.

The former teacher said he never sought recognition for his photography and was surprised by the USC award.

“I really just wanted to share the beauty I continually find,” he said. “My message to people is simple – if we want the earth to survive we have to learn to live with the creatures that we share the place with.”

He will be presented with the award “for his outstanding contribution to the University’s agenda of ensuring the sustainability and conservation of our natural environment, through providing an extensive and invaluable photographic resource of flora and fauna species for use by students, staff and the wider community”.

Mr Mills’ photographic work has been featured in publications including textbooks in Australia and the United States.

Images and information about the species identified on campus by Mr Mills can be found at www.usc.edu.au/wildlife or at www.natureatusc.weebly.com 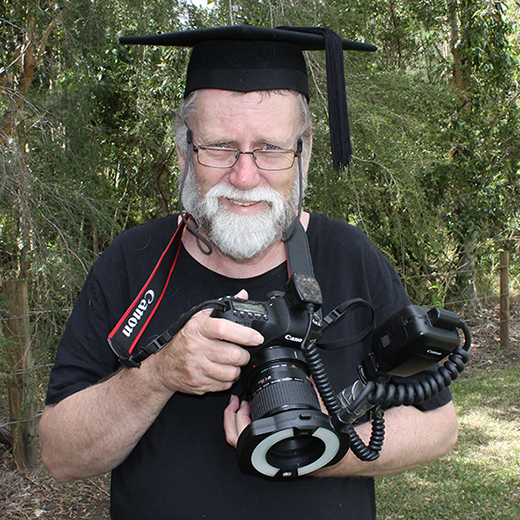