A Perth grandmother who began an international crusade to protect the world’s bears from exploitation will be become an Honorary Doctor of the University of the Sunshine Coast.

Mary Hutton, the founder of the world’s leading bear rescue and protection organisation, Free the Bears Fund, will be presented with the Honorary Doctorate at a USC Graduation ceremony at 4pm on Friday 7 April.

The ceremony at Matthew Flinders College Performance Centre will be one of nine graduation ceremonies from April 5-7 for 1,400 USC students.

The award recognises Ms Hutton’s inspirational voluntary work in saving hundreds of bears from barbaric treatment over the past 21 years, including bears being forced to dance in India, and sun bears destined to be killed to make bear-paw soup in Cambodia.

Free the Bears runs its own sanctuaries in Vietnam, Cambodia and Laos and provides support to partner organisations in Asia to rescue and rehabilitate bears.

“I am very honoured, humbled and grateful to be recognised in this way,” Ms Hutton said. “I never imagined that my life would take this path and I would receive an Honorary Doctorate for my work.

“The more I learnt about what was happening to the bears, the more I wanted to help, and once you become involved in something like this it is hard to walk away.”

In 2013, Free the Bears and USC united to give students from many disciplines the opportunity to engage with real world conservation and sustainability projects. This year, six Civil Engineering students will travel to Laos to design new infrastructure at one of its bear sanctuaries.

“The partnership with USC is wonderful, and the work of the staff and students and the knowledge they bring is very beneficial,” Ms Hutton said.

“It is especially important when young students are involved because they are the ones who can pick up the cause and use their knowledge and passion to improve the plight of bears and other threatened species.”
Two other honorary awards will be presented at the Graduation ceremonies on Friday.

Philanthropist Christopher Simon will be awarded an Honorary Senior Fellowship at the 10am ceremony for his generosity and vision, through his donations of major works by Aboriginal artists over the past 14 years.

The collection of Central and Western Desert Art is prominently displayed around campus and has proved invaluable in extending the cultural reach of the University through a educational package for local schools.

A USC staff member credited with making a significant contribution to the student experience at USC will become a Distinguished Companion of the University at the 1pm ceremony. 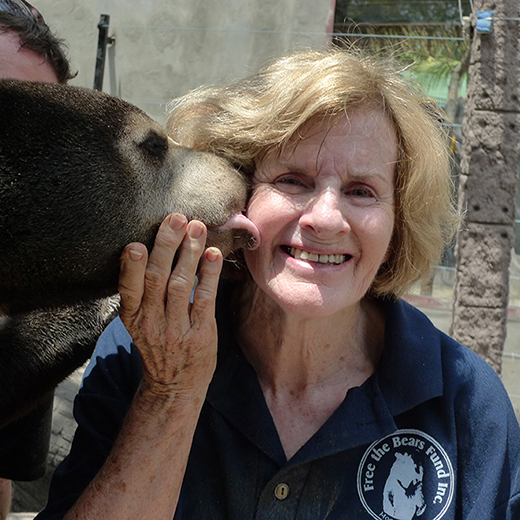