The first-year USC Bachelor of Sport and Exercise Science student from Nanango hopes to inspire others in danger of disengaging with education during high school.

The program aims to raise awareness of, and aspirations for, tertiary education in young high school students, including those from low socio-economic backgrounds.

“My main message was that doing well at school would give you more career options and access to better jobs,” said Hamilton, 17, who placed fifth nationally in his age group at Olympic distance triathlon and off-road cross triathlon, and third at the Noosa Triathlon.

“As a fresh-out-of-school uni student who was also from a small town, I shared my experiences to show the students they could be anything they wanted to be, but they had to be the ones to make it happen,” he said.

“Since Year 8, I wanted to do Sport and Exercise Science at USC, and sport was pretty much the only thing that got me through school. I knew I had to do well academically if I wanted to go away for school sport.

“In Year 12, I moved to Sunshine Beach State High School where I knuckled down and focused on getting the grades I needed to get to into uni.”

He is aiming to become an elite triathlete, while his career ambition is to complete a Master in Sport and Exercise Science to secure a high level coaching position at an organisation such as the Australian Institute of Sport.

USC Lecturer in Sports Studies Dave Robinson, who was involved in the Sport for Thought program at Aldridge State High School, said the session had motivated the sports-focused Year 9 students to think about what they could also achieve through higher education.

“It is a powerful thing for this group of students to see Hamilton and Annelise, who are not much older than they are, being so motivated about life, sport and study,” he said.

The University of the Sunshine Coast has partnered with Qld Oztag to deliver the Sport for Thought program. It is funded under the Federal Government’s Higher Education Participation and Partnerships Program (HEPPP). 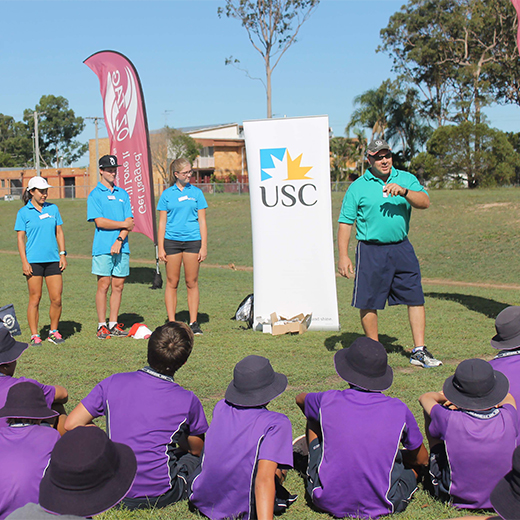