Ray and Denise Boyd and their daughter Alana Quade were honoured on Thursday 23 November for their many achievements representing Australia in track and field events, particularly at Olympic and Commonwealth Games, across several decades.

When Alana competed in pole vault at Beijing in 2008, it was the first time that a child of two Olympians had represented Australia at the Olympics.

A crowd of about 200 people – including previous inductees and current athletes from a wide variety of sports – attended the Hall of Fame event and enthusiastically applauded the new inductees.

Ray Boyd won 11 Australian championships in pole vault, ending his career on a high by winning a gold medal at the 1982 Commonwealth Games in Brisbane.

His best vault of 5.30 metres was achieved in Melbourne in March 1976. Ray went on to become a successful pole vault coach, with his children Alana, Matt and Jacinta all following in his footsteps.

Denise Boyd (nee Robertson) was one of the greatest sprinters throughout the 1970s and ’80s. She represented Australia at the 1976 Montreal Olympic Games and was the Australian team’s joint flag-bearer at the 1980 Moscow Games.

In her final Commonwealth Games appearance in Brisbane in 1982, she won a silver medal in the 4x400m relay.

Alana won her maiden national pole vault crown in 2008, before achieving a 4.30m clearance on Olympic debut at Beijing 2008.

She has since won the Australian Athletics Championships gold medal on three occasions (2009, 2013 and 2015).

She claimed gold medals at the 2010 Delhi and 2014 Glasgow Commonwealth Games, before a bronze medal at the IAAF Continental Cup in Marrakech and a new personal best of 4.81m in 2016 to become Australia’s best female pole vaulter.

Alana was an Olympic finalist in London in 2012 and closed out her career in remarkable fashion leaping 4.80m to place 4th at the Rio Olympic Games in 2016.

The Sports Hall of Fame ceremony also featured the presentation of three Certificate of Merit awards to sport administrators from across the region. 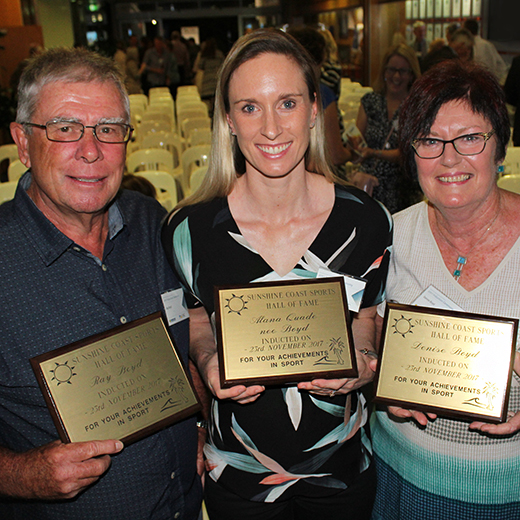