Former Caboolture boilermaker Nathan Spann is working as a site engineer on a multi-million-dollar housing project at Bokarina after completing a degree at the University of the Sunshine Coast.

Nathan, 26, recently received his Bachelor of Engineering (Civil) at a USC graduation ceremony and is thrilled to have landed a job with Sunshine Coast engineering firm Hall Contracting.

His success follows four years of combining full-time study with full-time work at a Caboolture transport and earthmoving company.

Nathan said it was gratifying to now be working as an engineer after having taken an unconventional path to his new career.

“When I finished high school, I decided to undertake a boilermaker/welding apprenticeship,” he said. “During my trade studies, I was exposed to the engineering discipline, and it inspired me to further my education.

“It wasn’t the typical approach taken by students entering the engineering industry, but I think being familiar with the industry helped me to relate the theory to practical applications.

“I’m really enjoying my role at Hall Contracting. I’ve been working on a fairly major housing project at Bokarina Beach and I’m learning a huge amount.”

Nathan, said the positive learning environment at USC had fostered his passion for his new career. He even travelled to Germany to learn about renewable energy as part of his degree through USC’s award-winning Study Overseas program.

“USC integrates environmentally sustainable practices into its courses and programs, and this has had a profound impact on the way I view the world,” he said.

“I developed a comprehensive understanding of the process of delivering an engineering project – from the design phase to the completion and handover phase.

“USC has a fantastic vibe, and students of all ages, nationalities and cultures share their university experiences with each other.”

Nathan, who grew up in the Central Queensland mining town of Moranbah and lived at Bribie Island and then on the Sunshine Coast while he studied at USC, is now based at Carseldine in Brisbane.

Applications are now open via QTAC to study at USC in 2018. 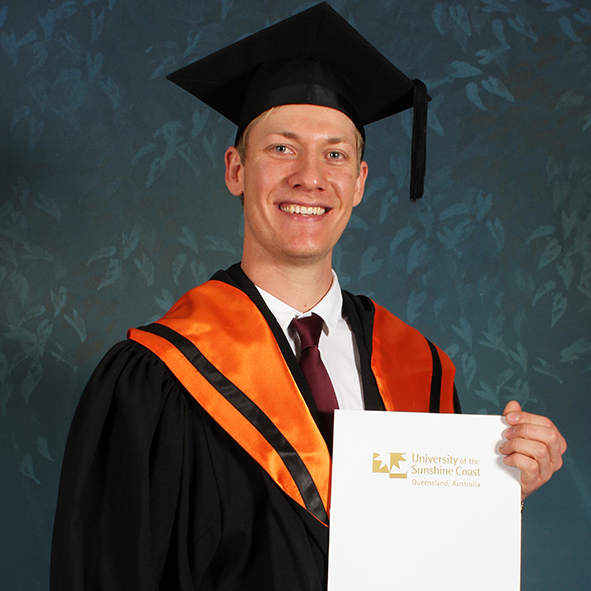