The first Aboriginal and Torres Strait Islander graduate from USC’s Fraser Coast campus is building a career to improve the lives of vulnerable children.

Helen Drake of Hervey Bay graduated from USC with a Bachelor of Human Services on 28 September.

The 22-year-old was among 400 USC students to graduate during a day of official ceremonies at Matthew Flinders College Performance Centre, Buderim.

Miss Drake said her goal was to become a child safety officer, working directly with vulnerable and at risk children, their families and carers.

“I’ve always been passionate about fighting the unjust and fighting for equality,” said the former Sydney resident.

“My mother is a kinship carer and my brother and some of my aunts are foster carers, so I have considerable experience being part of families helping children who have grown up in the child welfare system.

“Seeing where these children have come from to where they are now, I know I want to be a part of that story.”

After beginning a Social Work degree at a New South Wales university, Miss Drake moved to Hervey Bay in 2015 to be with her extended family.

She gained credit from her studies towards a Bachelor of Human Services, and completed the final part of the degree at USC’s Fraser Coast campus.

“USC’s Human Services degree is designed to prepare graduates for work in social justice and community welfare, which is perfectly suited to what I hope to do.”

Miss Drake said she was honoured to be considered a role model for other Indigenous students.

“It might sound predictable, but my message to other students is not to give up. You are going to have days that are hard, but don’t give up, just focus on the end goal.” 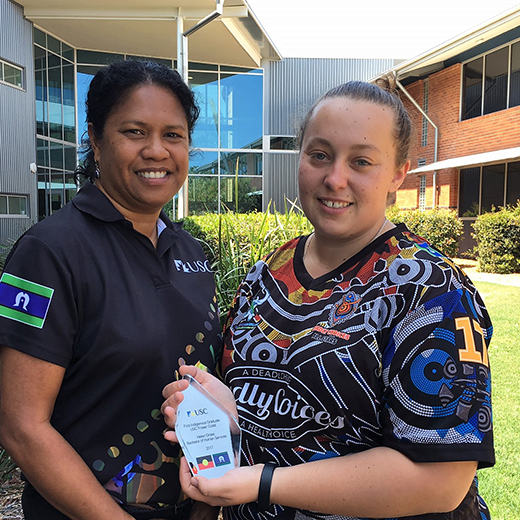