A USC Science Honours student who spent long nights in state forest north-west of Gympie searching for the “eye-shines” of Australia’s biggest gliding marsupial has received an Ecological Society of Australia scholarship.

Rylea McGlusky, 22, of Maroochydore, recently finished her fieldwork on the greater glider (Petauroides volans) of St Mary State Forest. She is now analysing the data for her degree.

The $2,000 scholarship will help cover expenses associated with her nine-month Honours project supervised by USC Senior Lecturer in Geospatial Analysis Dr Sanjeev Srivastava; Dr Tom Lewis of the Queensland Department of Agriculture and Fisheries; and Dr Teresa Eyre of the Queensland Herbarium.

“My research combines remote sensing spatial analysis and ecology, comparing the population of gliders in that forest environment today with the findings of a similar survey 20 years ago by Dr Teresa Eyre,” Rylea said.

Rylea, who became fascinated by nature while growing up on acreage at Woombye and watching Australia Zoo’s Steve Irwin on TV, said the greater glider was an iconic species to the east coast but recently classified as vulnerable.

“This project used aerial and ground methods to map and monitor changes in the glider’s environment, such as tree heights and the loss of habitat trees over time.

“We hope it will develop a cheaper, quicker habitat model to observe trends in similar locations with similar native animal considerations.”

The greater glider, known for its large, distinct ears, feeds on eucalyptus leaves and lives in tree hollows.

Rylea said she confirmed only three gliders during several weeks of her fieldwork. They were identified by the apparent white reflection of their eyes in spotlights directed up from the forest floor.

“I will present the outcomes of my research at the EcoTAS 2017 conference in New South Wales in November,” she said. 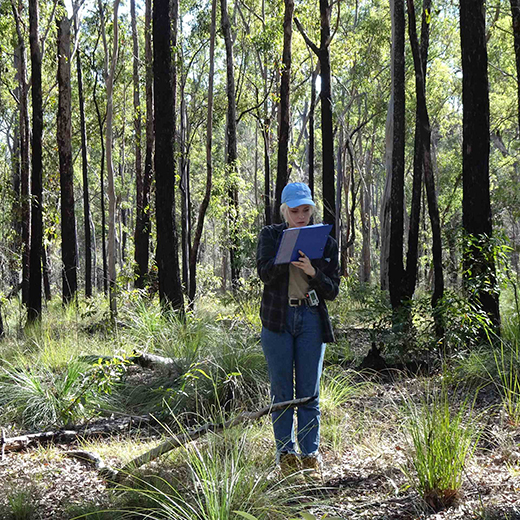