Researchers may have found a way to improve the survival chances of endangered birds bred in captivity after successfully training wild fairy-wrens to recognise danger warnings from other species.

The process could be likened to teaching the birds a foreign language and training them to recognise predators with their eyes closed, according to the research team that includes Dr Dominique Potvin from the University of the Sunshine Coast.

“Birds often eavesdrop on the calls of other species to take advantage of many eyes looking out for danger,” said Dr Potvin, the study’s lead author.

Reporting in this month’s Current Biology, she and fellow researchers taught fairy-wrens to recognise the alarm calls of other species without seeing the bird that made the call or the predator that provoked it.

“The results from this study were striking and provide insights to explain how this social learning occurs in nature,” she said.

The research group of Dr Potvin, Professor Robert Magrath and Dr Chaminda Ratnayake from the Australian National University and Professor Andrew Radford from the University of Bristol believe the findings may be relevant to conservation efforts.

“Often endangered species breed well in captivity only to be taken by predators soon after release,” Professor Magrath said.

“This study shows us how to prepare animals for life in the wild by training them to recognise the alarm calls from other species about predators before release.”

The group has long been interested in bird alarm calls and eavesdropping among species, with earlier studies finding that fairy-wrens were learning from direct experience.

Professor Radford say the birds would associate a novel alarm call with danger if they repeatedly saw a predator at the time they heard the sound.

Suspecting that fairy-wrens could also learn from other birds by listening closely to their calls, the researchers trained 16 wrens by broadcasting unfamiliar sounds in combination with the known danger calls of other species, in the absence of any predator.

“At first, the birds did not flee from the unfamiliar sounds but after training they often sought cover,” Professor Radford said.

He said this showed a type of indirect social learning, with the birds learning to associate new calls with known alarm sounds, without seeing the caller or the reason for it.

“It makes sense to learn from others when it is dangerous to learn through direct experience. So, theoretically, they could learn with their eyes closed,” he said. 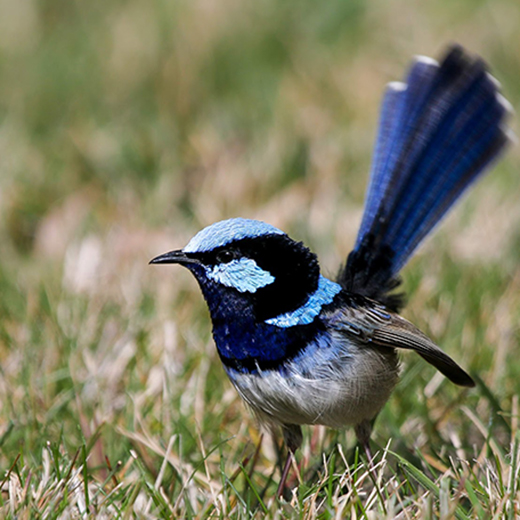