Genetic research led by USC has scratched below the surface to find the potential origins of sarcoptic mange, a disease in wombats that is highly infectious between animals and deadly if untreated.

Bribie Island-raised PhD student Tamieka Fraser, who is jointly enrolled at USC and the University of Tasmania, was lead investigator on a recently-published study that for the first time sequenced a genome in the scabies mite infecting two Australian marsupials, wombats and koalas.

The debilitating disease that starts with intense itching already affects a majority of bare-nosed and southern hairy-nosed wombat populations in southern states.

Further research aims to diagnose the disease earlier, reduce its incidence and understand the risk of it spreading to the endangered northern hairy-nosed wombat in Queensland.

Ms Fraser, 25, of Mooloolaba, said the results were exciting and unexpected.

“Sequencing the maternally-inherited genome of the mite, Sarcoptes scabiei, provides an enormous amount of information to enable us to understand more about the spread of this disease in wildlife, to hopefully aid conservation efforts,” she said.

The team studied the genomes of mites obtained from skin scrapings from wild wombats and koalas in Tasmania, Victoria and New South Wales.

“We found that the mites in both wombats and koalas were closely related to each other and showed no signs of geographic or host separation,” said Ms Fraser, a graduate of St Paul’s Anglican School at Bald Hills and Queensland University of Technology in Brisbane.

“The evidence suggests the mite may have been introduced to Australian wildlife by animals from overseas on multiple occasions since European settlement. For example, Australian mites were very similar, genetically, to mites on buffalo in Egypt and on dogs in America, China and Japan.

“This was surprising because previous research suggested the mange mite was introduced to Australia by European settlers. This research does not suggest this hypothesis is incorrect, but that the origins of scabies mites in Australia may be more complicated than originally thought.”

Ms Fraser, who expects to finish her PhD in mid-2018, said the team had since expanded the research to more animal species, including wild dogs and foxes.

Her work is supervised by Professor Adam Polkinghorne of the USC Animal Research Centre, and Dr Scott Carver of the University of Tasmania.

Ms Fraser said the fieldwork element of the study was a highlight.

“It was tremendously sad to see animals suffering in the wild but it was exhilarating to be working to help them,” she said.

“Catching a wombat with what looks like a big butterfly net was interesting. The largest we caught weighed 23kg and they’re fast, especially if you don’t realise you’re in front of their burrow.

“Australian wildlife and conservation have a special place in my heart and I’ve been inspired to improve our understanding of the epidemiology and diagnosis of this disease.”

Funding for the study was provided by a Holsworth Wildlife Research Endowment. 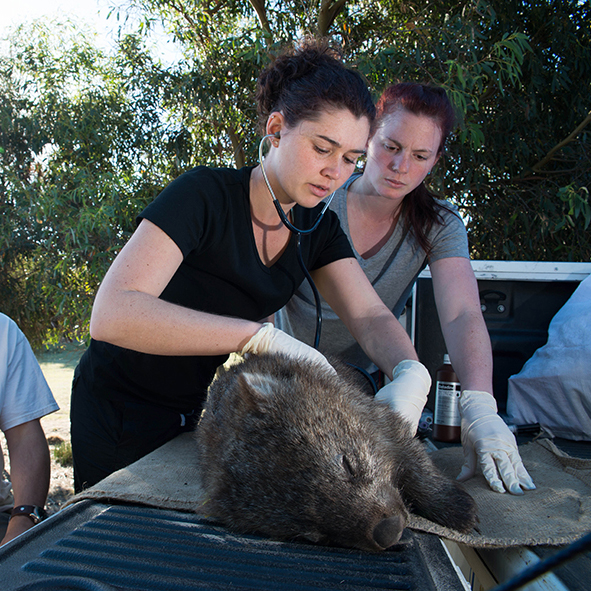