Maths is a gamechanger for elite sport - University of the Sunshine Coast, Queensland, Australia

International and national sports scientists, mathematicians, statisticians, coaches and athletes will discuss the latest advances in maths in sport at the conference, hosted by USC and Sunshine Coast Lightning from 25-27 July.

“The ability to live stream information to the bench has changed the analysis from being a reactive tool to a proactive one, allowing direct changes to tactics and personnel as it happens.”

Covering a range of elite sports, the conference will include sessions on the use of analysis to determine optimal batting partnerships in cricket, methods to evaluate player decision-making in AFL and predicting success in elite netball.

On Saturday 28 July, delegates will also have the opportunity to put the Sunshine Coast Lightning match against NSW Swifts at USC Stadium under the microscope.

“The performance analysis process, including the half-time and post-match analysis, will be broadcast live to delegates allowing them to contribute and gain an insight into the practical aspects of match-day,” Dr Bedford said.

“One wall of our team room is dedicated to performance analysis work and on game days, five people interrogate the match in detail and live stream the information to the coaches.”

“We look at player and team ratings, video game reviews, detailed passing analysis and track players’ workloads so our athletes and performance staff know how much they move on court and how their hearts are ticking along.”

“Each week, we spend one session with all the athletes pulling the analysis apart to inform strategy.”

The opposition is also examined in great detail. “It is important to know as much as we can about our opponents – where they receive the ball, where they position themselves, who to promote and who to block,” he said. 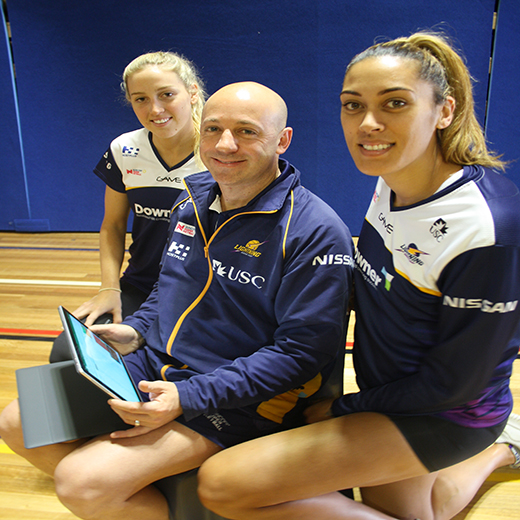