Ameh James believes that the current outbreak in the Democratic Republic of the Congo is an opportunity to trial the quick-test kit, quarantine infections before they spread further and save lives.

“This test aims to take about 30 minutes and you can do a simple blood test, get results on the spot and doctors will know whether people should be either treated, monitored or quarantined,” Mr James said.

“The turnaround time for testing is critical in terms of patient treatment, but what is happening is that patients are sent home for up to three days waiting for their results. In that time, they can easily infect their families and others."

The research was published in the Virology Journal this month.

Mr James said it was difficult to move forward due to a lack of opportunity to trial the kit. His last opportunity was during the Sierra Leone outbreak in 2014-2015 and then only 22 samples were tested.

“I worked 10 years as a pathology scientist in Africa, so I know the challenges of testing patients’ samples,” he said.

“If we could secure funding and support for our research and development, we could send hundreds of kits to the Congo and train people how to use them to gain vital data on the efficacy of the test, while potentially preventing people from infecting others.

“We would also be able to collect the data we need to gain regulatory approval to use the tests officially in outbreak situations."

“Our first pilot yielded promising results and we’ve been able to address the lessons learned, which was to ensure greater contamination controls, more effective storage of samples and training for those administering the test.”

World Health Organisation figures show that 11,315 people have been reported as having died from Ebola in six countries: Liberia, Guinea, Sierra Leone, Nigeria, the United States and Mali during the last outbreak in 2014-2015.

The current outbreak in the Democratic Republic of the Congo has already affected an estimated 39 people and 18 have died. The survival rate is 50 percent.

Mr James, who previously worked at the Medical Research Council Unit in the Gambia, said he’d initially worked on testing for West Nile Virus which affects people and animals globally, but expanded his focus after seeing on television the devastation of Ebola.

“I watched the terrible stories and heard about how it had been exported to other countries and I wondered what I could do to help solve the problem,” he said.

“I want this test to reach the global community wherever it is needed and could help.”

Mr James has previously presented preliminary data from his work at the UNESCO Merck Africa Research Summit in Geneva, Switzerland.

His work is being supervised by Associate Professor Joanne Macdonald, winner of the 2016 Rose-Anne Kelso award for Women, due to outstanding achievements in the life sciences.

“We are very excited to be developing rapid and accurate disease testing kits that could potentially be used on-site to better help manage outbreaks and eliminate disease,” she said.

Those wanting to donate to the cause can do so via USC's How to give page. 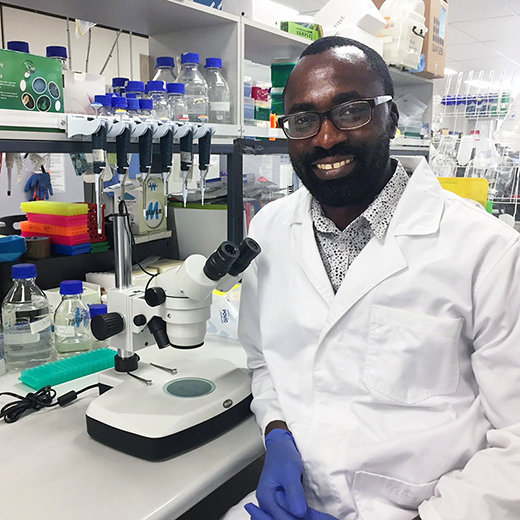