A future in professional and elite sport is on the agenda for Gympie’s Owen Dugdale who received a USC Medal for Academic Excellence when he graduated today with a Bachelor of Sport and Exercise Science.

USC is staging 12 graduation ceremonies over three days this week to celebrate the academic achievements of more than 1,800 graduating students.

“The degree has provided me with a wealth of knowledge in a range of difference fields, including anatomy, physiology, nutrition, and coaching,” the 20-year-old said.

“Most importantly, it taught me how to interact with professional athletes and coaching staff and how to apply my knowledge in realistic scenarios.”

As part of a clinical placement with Sunshine Coast Lightning, Owen worked under the guidance of Head of Performance Analysis Anthony Bedford to produce analytical reports using GPS data collected during training and strength and conditioning sessions.

“These reports inform decisions on training volume and duration, injury prevention, and drills and movement patterns that coaches can incorporate into the players’ training and gym sessions,” Owen said.

It is a field of sports science that the keen sportsman plans to continue to expand his knowledge of and build into a career.

“Many of my interests have revolved around playing sport and this has grown throughout the last few years,” said Owen, a batsman in the A Grade Premiership league for Harlequins Cricket Club Gympie, who also plays rugby union and touch football.

An OP1 student, Owen was awarded a USC Vice-Chancellor’s Merit Scholarship of $9,000 to assist with his studies when he began his degree in 2016.

“I chose to study at USC because of its convenient proximity to Gympie and the smaller classes class sizes allowed for greater teacher-student interaction. The scholarship provided a welcome additional financial benefit,” he said.

“High points of my time at USC involved interacting and learning with hard-working, like-minded people who also had interests in sport and the science behind it, including the very knowledgeable and approachable teachers.

“Clinical placements gave me confidence to utilise the knowledge I had gained and provided valuable learning experiences working alongside knowledgeable practitioners and interacting with talented athletes.” 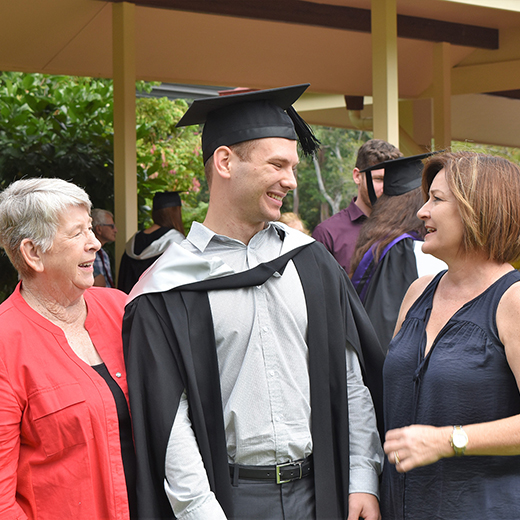