When Woodford’s Nicole Guenther missed out on being selected in the Under 12 Queensland netball side, it ignited the focus and ambition that can now be seen every time she takes the court for USC Thunder.

“I’d been playing netball since I was eight years old and by the time I was 12 I figured I was good enough to make the state side,” Nicole, 18, said.

“When I missed out, I was so shocked but it made me realise, even at that young age, that to be the best you have to train like the best. That was a turning point for me and netball has been my life ever since.”

In Nicole’s final year of school at St Columban's College at Caboolture in 2018, news spread through the netball community that a new club would debut in Queensland Netball’s 2019 Sapphire Series based at USC’s high performance sports precinct.

“I’d always considered USC as an option because my older brother studies at the Sippy Downs campus and is also part of the High Performance Student Athlete (HPSA) Program for cycling,” Nicole said.

“But once the USC Thunder team was announced, I knew that that was where I wanted to be for both my sport and my study,” she said.

“I tore my anterior cruciate ligament last year so was really worried about how that might damage my chances for selection, but just before Christmas I got a call offering me a place in the inaugural USC Thunder team. Then the next month I got my offer from USC to study my first preference of a Bachelor of Design so I was pretty happy.”

Majoring in Interactive and UX Design, Nicole is also part of the HPSA program alongside a number of other state-level netball players and national USC Lightning team members including Peace Proscovia and Jacqui Russell.

“The Lightning squad has such an amazing team culture and our Thunder team is learning so much from it,” Nicole said.

“Every player is teaching us all by example, not just about netball but off the court too and that’s such a great opportunity for someone like me just starting out at uni and at such a high representative level of sport.”

USC Thunder will play the Bull Sharks in Round 8 of the Sapphire Series on Saturday 10 August at the Queensland State Netball Centre in Brisbane, and the team’s next home game at USC Stadium will be against the Tigers on Sunday 18 August. 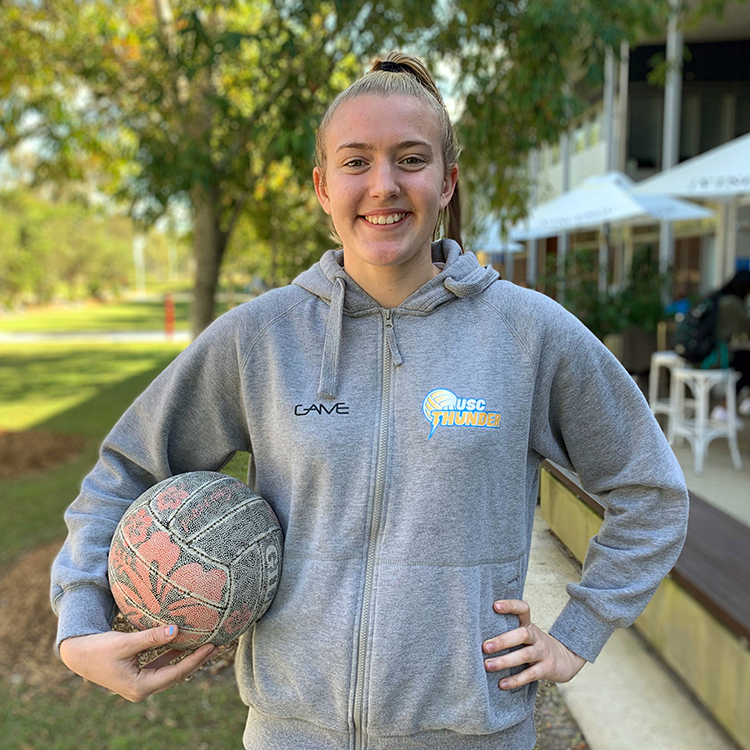